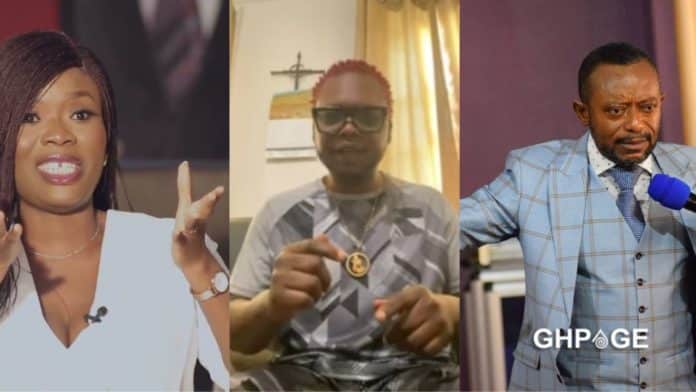 Nana Tornado has openly accused his former boss, Deloris Frimpong Manso aka Delay of not paying him a dime after using him for donkey works.

According to Nana Tornado, for all the seven years he worked for Delay, he never received a penny for the services he rendered to her and that is one of the main reasons they are no more friends.

Speaking in a new video, Nana Tornado revealed that Rev Owusu Bempah was the angle who came to his aid sometime ago when all else had filed and things have fallen apart.

As narrated by Nana Tornado, after he shipped his car from the States to Ghana, he was financially weak to clear it from the port because he was severely broke and had no one to offer him a helping hand.

He then contacted controversial Maame Ngege who confessed to him that she couldn’t help but she can link him to benevolent Rev Owusu Bempah.

The leader and founder of Glorious Word Power Ministries handed him Ghc 30,000 to go and clear his car from the port although that was the first time they met

Nana Tornado continued that, he went back to tell Rev Owusu Bempah that he has been able to raise funds hence he doesn’t need his money anymore but the man of God insisted that he keeps it.

According to Nana Tornado, this thoughtfulness and kindness from Rev Owusu Bempah is the reason he doesn’t slander him and always keep mute on his trending issues.

Meanwhile, this same Nana Tornado jumped to Delay’s defense after Afia Schwar described her as a barren woman after earlier promising not to take sides in their beef.