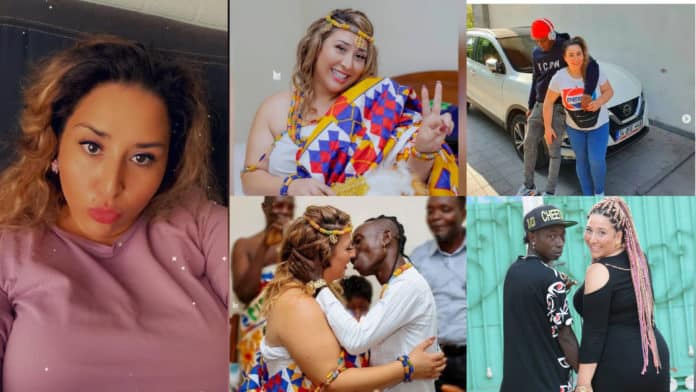 Who is Liha Miller? Well, as Ghanaian musician Patapaaa and her German wife deal with their marital cracks, let us get to know who the woman truly is.

The couple married in a conventional way first, then had their white wedding ceremony, which has a lot of interesting photographs and videos floating around the internet.

Patapaa’s choice to marry Liha Miller was announced a year ago to the due date and verified a few days before their wedding, despite the fact that many Ghanaians were sceptical.

Whatever the case may be, many Ghanaians are curious as to who Liha Miller is and why she chose Patapaa to lead her down the aisle.

What was Liha Miller’s motivation to decide to marry Patapaa and how deep are their marital problems now?

1, Liha Miller is a wealthy German lady who was born on June 14 and currently resides in Cologne.

2, Patapaa was introduced to Liha Miller in Antwerp, Belgium, in 2018 when the musician performed his hit song “One Corner.”

??3, However, it is rumoured that Liha Miller has dated a number of African musicians, like Bisa Kdei of Ghana and Nasty C of South Africa, among others, despite the fact that she has only been seen in selfies with them.

5, Liha Miller is a huge fan of African music and follows a lot of them on social media, as well as attending their events in the diaspora and attempting to take photographs with them. She is a huge fan of Stonebwoy, Teni, and others.

6, Liha Miller is a fashionista and a world traveller who aspires to see as many places as possible. Her travels have taken her to Nigeria, South Africa, and Ghana.

7, Prior to dating Patapaa, Liha Miller had a girlfriend named Queen Peezy, who has been suing the musician for being dumped as he began to make progress in his music career.

8, It was rumoured in October 2020 that Liha Miller had shattered Patapaa’s heart after she uploaded a selfie of herself in the company of another man. She eventually debunked the rumour.

9, Liha Miller has always professed her undying love for PatapaA, and multiple videos posted online have proven the validity of their relationship, which has since blossomed into marriage.

10, Currently, Liha Miller and Patapaa’s marriage seems to have encountered a bit of a problem which has the potential to cripple their union. Patapaa has blamed blogger Zionfelix for his marital woes.