Lagos, Nigeria (CNN)The death of Queen Elizabeth II has prompted an outpouring of reflection and reaction online. But not all was grief — some young Africans instead are sharing images and stories of their own elders, who endured a brutal period of British colonial history during the Queen’s long reign.”I cannot mourn,” one wrote on Twitter, posting an image of what she said was her grandmother’s “movement pass” — a colonial document which prevented free travel for Kenyans under British rule in the east African country.Another wrote that her grandmother “used to narrate to us how they were beaten & how their husbands were taken away from them & left to look after their kids,” during colonial times. “May we never forget them. They are our heroes,” she added.

Their refusal to mourn highlights the complexity of the legacy of the Queen, who despite widespread popularity was also seen as a symbol of oppression in parts of the world where the British Empire once extended. 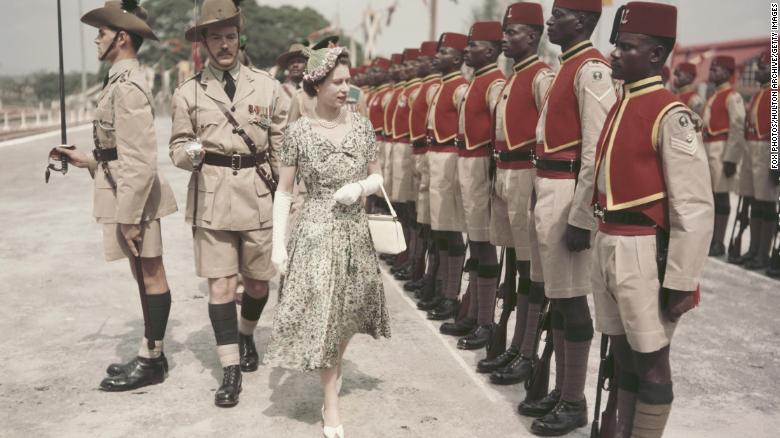 Queen Elizabeth II inspects men of the newly-renamed Queen’s Own Nigeria Regiment, Royal West African Frontier Force, at Kaduna Airport, Nigeria, during her Commonwealth Tour, on February 2, 1956.Kenya, which had been under British rule since 1895, was named an official colony in 1920 and remained that way until it won independence in 1963. Among the worst atrocities under British rule occurred during the Mau Mau uprising, which started in 1952 — the year Queen Elizabeth took the throne.The colonial administration at the time carried out extreme acts of torture, including castration and sexual assault, in detainment camps where as many as 150,000 Kenyans were held. Elderly Kenyans who sued for compensation in 2011 were ultimately awarded £19.9 million by a British court, to be split between more than 5,000 claimants.The UK Foreign Secretary at the time, William Hague, said: “The British Government recognises that Kenyans were subject to torture and other forms of ill treatment at the hands of the colonial administration. The British government sincerely regrets that these abuses took place, and that they marred Kenya’s progress towards independence.”

Africa’s memory of the Queen cannot be separated from that colonial past, professor of communication Farooq Kperogi at Kennesaw State University told CNN.”The Queen’s legacy started in colonialism and is still wrapped in it. It used to be said that the sun did not set over the British empire. No amount of compassion or sympathy that her death has generated can wipe that away,” he told CNN. 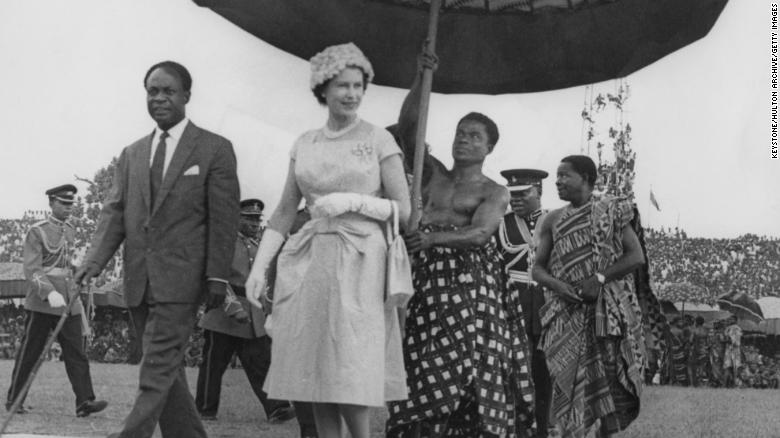 Queen Elizabeth II on her way to the Kumasi Durbah with Kwame Nkrumah, President of Ghana, during her tour of Ghana, November 1961.

While many African leaders have mourned her passing — including Nigeria’s President Muhammadu Buhari, who described her reign as “unique and wonderful” — other prominent voices in regional politics have not.In South Africa, one opposition party, the Economic Freedom Fighters (EFF), was unequivocal. “We do not mourn the death of Elizabeth, because to us her death is a reminder of a very tragic period in this country and Africa’s history,” the EFF said in a statement.”Our interaction with Britain has been one of pain, … death and dispossession, and of the dehumanisation of the African people,” it added. 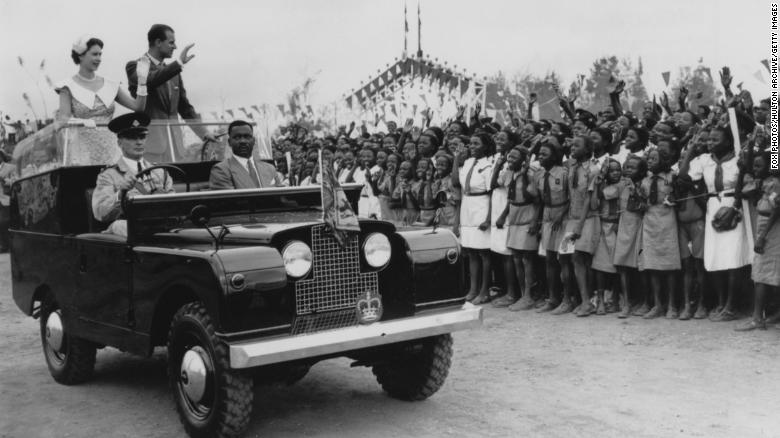 Queen Elizabeth II and Prince Philip wave to a crowd of schoolchildren at a rally held at a racecourse in Ibadan, Nigeria, February 15, 1956.Others recalled Britain’s role in the Nigerian civil war, where arms were secretly supplied to the government for use against Biafrans who wanted to form a breakaway republic. Between 1 million and 3 million people died in that war. British musician John Lennon returned his MBE, an honorary title, to the Queen in protest over Britain’s role in the war.Still, many on the continent remember the Queen as a stabilizing force who brought about positive change during her reign.Ayodele Modupe Obayelu from Nigeria told CNN: “Her reign saw the end of the British Empire and the African countries … became a Republic. She doesn’t really deserve any award or standing ovation for it, but it was a step in the right direction.” 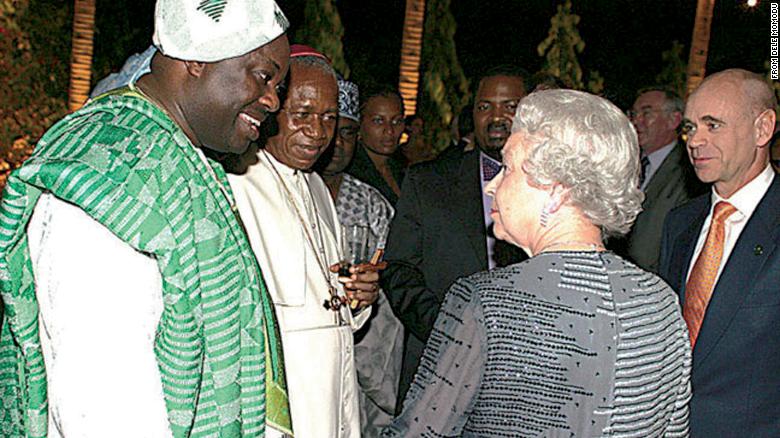 Nigerian magazine publisher Dele Momodu met Queen Elizabeth on a 2003 state visit to Abuja, Nigeria.And Ovation magazine publisher Dele Momodu was full of praise, recounting meeting her in 2003 in Abuja while covering her visit to Nigeria. He added that he had fled Nigeria for the UK in 1995, during the dictator Sani Abacha’s regime.”I told her I was a refugee and now the publisher of a magazine. She told me ‘congratulations,’ and moved on to the other people on the line. I salute her. She worked to the very end and was never tired of working for her country. She did her best for her country and that is a lesson in leadership,” he told CNN.Momodu believes that the Queen did try to “atone” for the brutality of the British Empire. “She came to Nigeria during our independence and some of the artifacts were returned under her reign. That is why the Commonwealth continues to thrive. I feel very sad that the world has lost a great human being.”Adekunbi Rowland, also from Nigeria, said: “The Queen’s passing represents the end of an era. As a woman, I’m intrigued by her story. This young woman had an unprecedented accession to the throne, and with much grace and dignity did everything in her power to protect the country and Commonwealth she loved no matter what it took.”

The Queen once declared, “I think I have seen more of Africa than almost anybody.”She made her first official overseas visit to South Africa in 1947, as a princess and would go on to visit more than 120 countries during her reign, many of them on the continent. 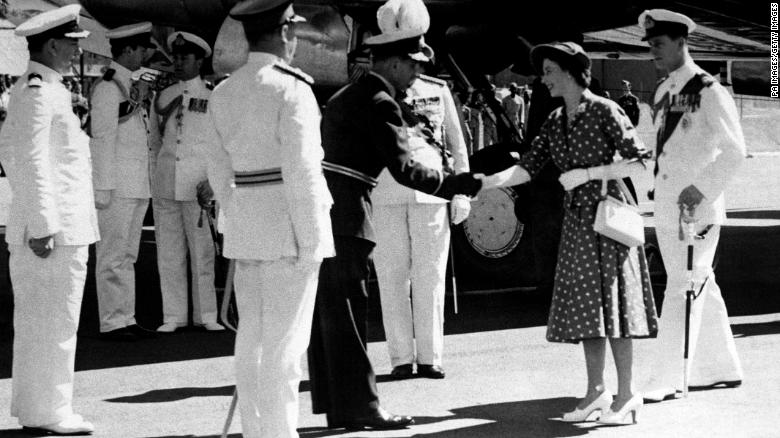 Elizabeth, then a princess, and Prince Philip step from their plane in Nairobi, Kenya, on the first stage of their Commonwealth tour in 1952.It was while visiting Kenya in 1952 that she learned that she had become Queen. Her father George passed away while she was there with Prince Phillip and she immediately ascended the throne.As colonialism later crumbled and gave way to independence and self-rule in what had been British overseas territories, the former colonies became part of a Commonwealth group of nations with the Queen at its head and she worked tirelessly to keep the group together over the years.She forged strong bonds with African leaders, including Nelson Mandela, whom she visited twice in South Africa, and Kwame Nkrumah, with whom she was famously pictured dancing during her visit to Ghana in 1961. 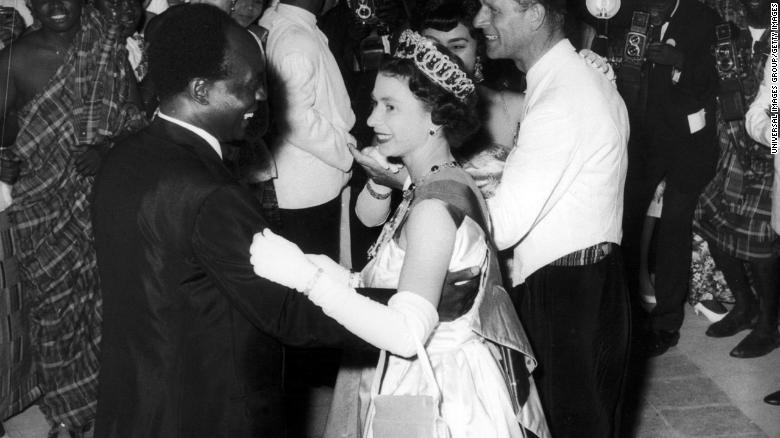 Queen Elizabeth II dances with President Kwame Nkrumah of Ghana, during her visit to Accra, Ghana, in 1961.However, there is now a growing clamor for independence and accountability over Britain’s past crimes such as slavery. In November 2021, Barbados removed the Queen as its head of state, 55 years after it declared independence from Britain, and other Caribbean countries, such as Jamaica, have indicated they intend to do the same.Prince William and his wife, Catherine, Duchess of Cambridge, visited Jamaica in March but they faced protests and calls for reparations during the trip. There were also calls for a formal apology for the royal family’s links to slavery.”During her 70 years on the throne, your grandmother has done nothing to redress and atone for the suffering of our ancestors that took place during her reign and/or during the entire period of British trafficking of Africans, enslavement, indentureship and colonization,” wrote members of a protest group, the Advocates Network Jamaica.In June, Prince Charles became the first UK royal to visit Rwanda, where he was representing the Queen at the Commonwealth Heads of Government Meeting.

Following his mother’s death, he now heads the Commonwealth, and will embark on a new relationship with its members, about a third of which are in Africa.Some are asking whether he will be as effective in building the organization as his mother, and above all, how relevant it still is, given its roots in Empire.