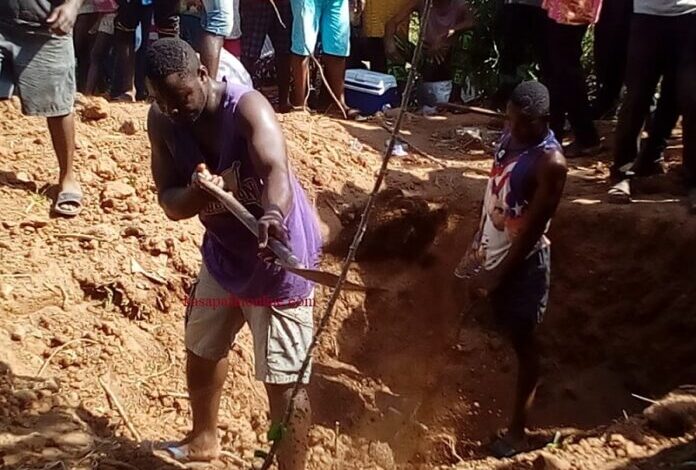 An attempt by a 25-year-old self-acclaimed fetish Priest to bury a young boy and a cow alive at Abura Tuakwa in the Abura Asebu Kwamankese District of the Central Region has been foiled.

The suspect, Amoaku had planned to undertake his dastardly act on a cassava farm around 12:30 am on Wednesday, April 20, 2022, when his move was thwarted by an eyewitness.

Information gathered indicates that the suspect was seen carrying a cow in a Kia truck driving in the direction of the cassava farm.

An eyewitness then quietly monitored him till he drove to the farm only to find out that the suspect had dug a grave and with the help of some accomplices removed the cow from the truck. As they pushed the cow and a little boy into the grave alive, the eyewitness then shouted at them and they run away.

Because the eyewitness was alone, he decided to go home and alert the Chiefs and the residents only for them to come back and find out that the grave has been covered.

After digging up the grave the next day, over 50 colas, schnapps, a gun, and 3 packets of bullets were found.

The Regent of Abura Tuakwa Nana Kojo Paul said the Chiefs and Elders have invited the fetish Priest to the Chief’s Palace to come and explain why he did that.

He suspects the suspect is into money rituals because of the kind of luxurious cars he drives around.

Nana Kojo Paul warned that the suspect will be held responsible if any calamity befalls the community.

He advised the youth to stay away from quick money and other bad behaviors.