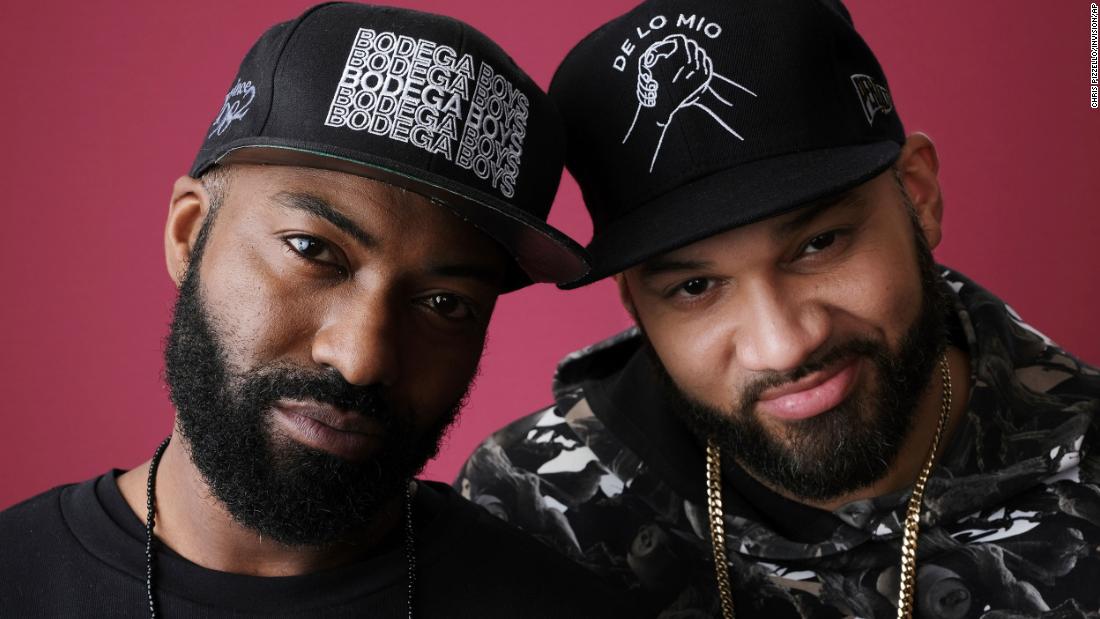 (CNN)The recent announcement that both the series “Desus & Mero” and the partnership between the two co-hosts is no more was met on the internet with the type of grieving usually reserved for a celebrity death.

It’s understandable given what The Kid Mero, Desus Nice and their beloved show — the first of its kind in late night — represent to many, launching a series that helped pave the way for others that have also shone a light on community and conversation, including Lebron James’ “The Shop: Uninterrupted” on HBO (which is owned by CNN’s parent company) and “Tha God’s Honest Truth with Charlamagne Tha God” on Comedy Central.
A recent report by Puck News cited their manager Victor Lopez as the cause of a schism between Desus and Mero, which ultimately led to the show ending.
A source close to the co-hosts confirmed to CNN that Lopez was banned from the set by Showtime after multiple complaints of alleged bad behavior including bullying staff members.
The source, who requested anonymity citing concern for professional relationships, said Lopez’s alleged problematic behavior preceded the Showtime series, which ran for four seasons starting in 2019 and dates back to the pair’s time hosting their show on Viceland, which ran for two seasons beginning in 2016.
CNN has reached out to Lopez and reps for Desus, Mero and Showtime for comment about the allegations.
Publicly, Showtime has only said in a statement, “Desus Nice and the Kid Mero have made a name for themselves in comedy and in the late-night space as quick-witted cultural commentators. In tweeting the news the show was ending the show’s Twitter account noted that the two men “will be pursuing separate creative endeavors moving forward.”
Neither Desus nor Mero have commented publicly about whether tensions with Lopez contributed to their show ending, choosing instead to retweet the announcement of the cancellation with Desus adding, “shouts to showtime & shouts to the hive, thanks for being part of the journey. proud of the show my staff made every episode. Big tings soon come….”
According to the source, Showtime received multiple complaints about Lopez by the end of last year and conducted an investigation into the allegations before instituting the ban – something Desus supported, but Mero did not.
‘Whatever you need me to do, I’m there’
There is history behind Mero’s seeming loyalty to Lopez that dates back to well before the show came to be.
During an appearance on Math Hoffa’s podcast “My Expert Opinion” that was recently posted on YouTube, Mero explained why he felt indebted to Lopez.
Bronx native Mero described Lopez as a smart, “South side Jamaica, Queens [in New York City] kid” who graduated with honors from college and came across Mero’s comedy writing before he became famous.
According to Mero, Lopez was working for a small company that specialized in independent films and was looking to expand into management when he started advocating for Mero.

Desus Nice, Victor Lopez and The Kid Mero attend Showtime debut of “Desus & Mero” at the Clocktower New York Edition in 2019.
“He was just like ‘Yo, there’s this dude man. This Kid Mero dude, man he’s funny as f***,'” Mero recalled of those early years in the clip.
“‘I feel like White people don’t understand it, but they will though. Trust me,'” Mero quoted Lopez as saying.

Mero said Lopez was told by his then boss that if he wanted to stay employed at the company, he needed to distance himself from Mero.
“[Lopez] was like, ‘Well I guess I ain’t working here no more’ and he quit the job on the spot,” Mero said. “So since then I’ve been like, ‘Bruh, I’ll do whatever…Whatever you need me to do, you know what I’m saying, I’m there.'”
‘A rapport unlike anything I’ve ever seen’

The split between Desus and Mero shocked and saddened friends and fans.
The pair’s journey from being social media comedians to hosting a refreshing late-night show on cable that drew guests the caliber of former President Barack Obama is one that has been celebrated in the Black and Latin communities.

Acquainted since high school (Desus is also from The Bronx), the pair had much in common being children of immigrants (Mero’s parents are Dominican and Desus’ are Jamaican).
The two were each favorites of Black Twitter for their witty tweets, before coming together professionally in December 2013 to offer their takes on pop culture with the Complex podcast, “Desus vs. Mero.”
They then joined MTV’s “Guy Code” before launching their extremely popular “Bodega Boys” podcast, the precursor to “Desus & Mero.”
Whether joined by a guest or just the two of them, the pair kept the audience – and themselves – entertained with commentary about everything from sports to pop culture.

Desus Nice, left, and The Kid Mero, hosts of the Showtime talk show “Desus & Mero,” pose together for a portrait during the 2019 Winter Television Critics Association Press Tour, Thursday, Jan. 31, 2019, in Pasadena, Calif.
Their chemistry was undeniable as they played to and off of each other.
“They had just a rapport with one another that was unlike anything I’ve ever seen,” a source who began working on the show when it was picked up by Showtime told CNN. “The way they just riff off of each other was hilarious.”
Desus acknowledged that kinship in an interview with Essence magazine last year.

“The fact that Mero is on the same wavelength and bandwidth with me, that’s the secret in the sauce,” he said.
The former employee told CNN that energy carried over to the staff and crew on the show, which operated smoothly and like a family.
But that familial tie didn’t extend to Lopez and the network.
“Victor just torched the relationship with Showtime beyond repair,” the source close to the two co-hosts told CNN.
‘End of an era’
The ending of “Desus & Mero” marks so much more than just the estrangement of two longtime friends.
Nsenga Burton, founder of “The Burton Wire” site and a professor at Emory University, in Atlanta who specializes in the intersection of race, class, gender and the media told CNN the series “elevated the culture around the bodega, a small corner store in Black and Brown neighborhoods in New York City and its boroughs, to it’s rightful place as the center of conversation, culture and comedy in immigrant neighborhoods.”

“The bodega is right up there with the barbershop for Black American men and the hair salon for Black American women when it comes to cultural exchanges, informed commentary often based on observation and a place where you can verbally joust without fear of retribution, because the homespun wit is comedic and on point,” she said. “The verbal jousting between the two brothers is more than just that — Desus and Mero represented the coming together of Caribbean American immigrants, who are often represented in popular culture as being in opposition to one another, as in fact brothers in the struggle with shared experiences united in their love of Bodega culture, which is an extension of hip-hop culture.”

Issa Rae sits down with Desus Nice and The Kid Mero on their show.
“Their breaking-up is heartbreaking because not only is it the end of an era of unscripted socio-political commentary that was comedic but not comedy, but also the end of the love between Desus, the son of Jamaican immigrants and Mero, the son of Dominican immigrants, and ostensibly their brotherhood represents the best outcome of the immigrant experience — finding community and commonalities,” she added.
Neither man has revealed what they are working on next and it remains to be seen if the two will reunite professionally or personally.

“We similar, we not congruent,” Mero said of him and Desus during Hoffa’s podcast, which appears to have been recorded before the split. “Congruent means exactly the same, similar means same shape, but different sizes…different proportions.”