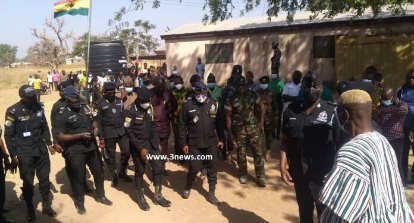 The Inspector General of Police, Dr George Akuffo Dampare, has visited families and colleagues of two officers who met their untimely demise in a shoot-out with armed robbers in Zuarungu in the Bolgatanga East District of the Upper East Region Wednesday night.

Constables Emmanuel Akowuah and Adam Suley are said to have lost their lives as they responded to distress calls of a robbery attack on a shop at the Zuarungu Market.

The robbers upon seeing the police officers on their patrol motorbike shot at them, hitting the fuel tank which exploded and burst into flames.

According to a police situational report, Constable Adam Suley was partially burnt by the flames.

IGP Akuffo Dampare, in the company of members of the Regional Security Council (REGSEC), visited the crime scene on Thursday morning to assess the situation.

He also visited families of the officers and the chief of the area to commiserate with them.

It was an emotional moment as colleague officers could not be consoled as they shed uncontrollable tears when the IGP visited them at post.

He assured the entire residents of Zuarungu and its environs of police protection.

Meanwhile, officials have put an unnamed ransom on the head of the robbers, who are perceived to be of Fulani extraction.

The sitrep announced that an intelligence-led operation to arrest the robbers has been launched.