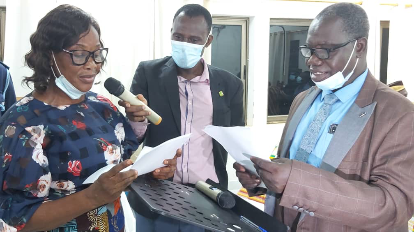 Twelve (12) out of the fifteen (15) Municipal and District Chief Executive nominees for the Upper East Region have been successfully confirmed and sworn into office.

Paul Abugre, the nominee for Tempane District was outrightly rejected, and has to be replaced by another nominee, while the nominee for Binduri and Garu Districts, Ayinga Abagre Yakubu and Osman Musah, who were rejected in the first round of voting, stand another chance to be endorsed or rejected.

President Nana Akufo-Addo’s nominees who had 100% endorsement are; Rex Asanga of the Bolgatanga Municipality, David Amoah of Bolga East District, Rita Atanga of Bongo District, and Thomas Duanab of the Talensi District.

Addressing the occasions of their confirmation, Upper East Regional Minister, Stephen Yakubu,, urged the newly sworn in MDCEs to work closely with assembly members to implement programmes and projects to alleviate poverty and improve the living standards of their areas.

He noted that, government has re-structured the District Development Fund (DDF) District performance assessment tool, and thus impressed upon the assemblies to utilize the tool to mobilize more financial resources to meet their development needs.

“The revised Local Economic Development (LED) policy should guide MMDAs in how to tap into your vast local potentials and attract the needed partnership to leapfrog development. Effective local governace all over the world is dependent on the ability of MMDAs to provide their own resources to meet the increasing needs of people such as infrastructure, sanitation, health and security”.

Mr. Yakubu further urged the chief executives and assembly members to mobilize their electorates to take the COVID-19 jab to avert a further spread of the pandemic.

On their part, newly sworn in MDCEs pledged to work with assembly members and stakeholders to foster in development in their areas.

They indicated their resolve to work in synergy with development partners to address issues of poverty, falling standards of education, poor road infrastructure, teenage pregnancies , alcoholism and water and sanitation.