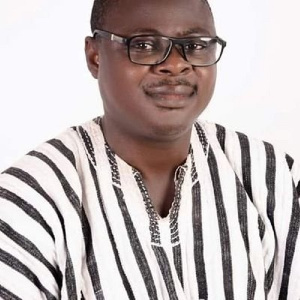 • Emmanuel Kwesi Dawood has been accused of incest

A case of incest has been leveled against the National Democratic Congress’ Central Regional Communication Director, Emmanuel Kwesi Dawood.

According to a report by the Daily Guide newspaper, the NDC executive allegedly had sex with his underage daughter, impregnating her in the process.

The paper continued that Emmanuel Dawood had been having uncarnal knowledge with his daughter since 2019 when she was 15-years-old.

“He then allegedly got his friend to administer an injection to terminate the pregnancy last year, and according to the victim, she bled for more than two weeks,” the paper reported.

In the accounts of the girl, she explained how badly hurt she has been by the act. She has vowed to seek justice at all cost.

“It has been haunting me. He made me go for an abortion. He started having sex with me in 2019. The last time he had sex with me was in June 2021. He was NADMO Coordinator and is the current NDC Regional Communications Officer. He did not look after me,” the girl is reported to have said.

The paper also reported that the girl claimed that her father had beaten her up when he found out that she had reported the incestuous act to her mother, following which the case was reported to the Swedru police.

“My mother was not happy for me to leave and go and stay with him. He promised to send me abroad to further my education and warned that if I reveal the act to anybody, he was going to end the plans to send me out for my education,” she is reported to have added.

Daily Guide further reports that after failed attempts to get the police at Swedru to pursue the case, the girl’s mother moved it to the Central Regional Commander, COP Kwadwo Antwi Tabi.

It was after this attempt that the commander, getting a briefing on all the facts of the case, ordered for the appropriate charges to be levelled against the suspect.

The mother of the victim also explained attempts by some officials of the NDC to get her to not pursue the case.

“NDC officials have been coming to us to plead for him but I have made it clear that it is a criminal case and he has to face the full rigours of the law. My daughter has been in distress and has said she needs nothing but justice,” the mother is quoted to have said.

She is also reported to have said that she suffered a similar fate and it is for this reason that she intends to pursue this case till justice is served.

“He impregnated me when I was in the first year in secondary school. He is doing the same thing to our own daughter. I do not know if he was brought into this world to destroy our lives.

“He abandoned me after the pregnancy and never saw him until my daughter grew up and he came for her,” she is said to have said.

The case is due to be called in court on October 13, 2021, with charges of conspiracy to commit crime, defilement, incest and illegal abortion expected to be slapped on the NDC executive.

The mother of the victim has also called for the Inspector General of Police to intervene in the case to ensure that it is not thrown out without the right punishments meted out to Emmanuel Kwesi Dawood.