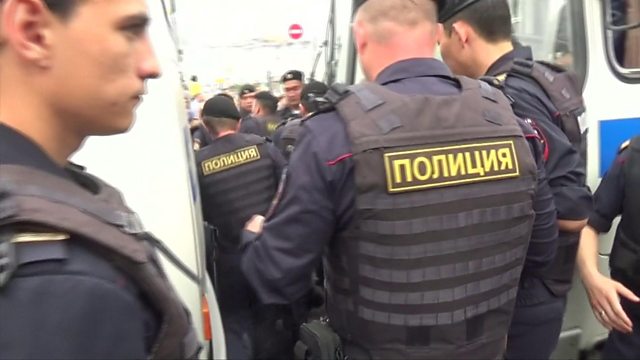 Mr Golunov was released after lawyers said drugs had been planted on him.

It also emerged that police photos of a drugs lab were not taken in his flat.

Mr Golunov, 36, who had been working for the Latvia-based independent news website Meduza, alleged he had been beaten while in custody.

He was later released under house arrest before being freed late on Tuesday, a day after three respected newspapers published the same front-page headline: “I/We are Golunov.”

Hundreds of people were arrested during a pro-Golunov rally in central Moscow on Wednesday, many of them bearing the same slogan as the newspapers.

Interior Minister Vladimir Kolokoltsev announced the suspension of officers involved in the case on Tuesday, saying that the reporter’s guilt “had not been proven”.

President Putin has avoided commenting on the case, although his spokesman said earlier in the week that the Kremlin had been keeping a close eye on it.

Mr Putin will appear before the Russian public in the annual “Direct Line” phone-in on 20 June, when Russians are given the chance to speak to the president.

Russian commentators have suggested the Kremlin is keen for the story to disappear before the event.

Mr Golunov was stopped last week while on his way to meet another journalist in Moscow. Police officers said they found the drug mephedrone in his bag, and more drugs and weighing scales in a search of his home.

The journalist’s lawyers and press freedom activists said the drugs had been planted in order to silence the investigative journalist.

Supporters immediately claimed that he was innocent and a victim of false drugs charges used against opposition figures and human rights activists by the Russian state.