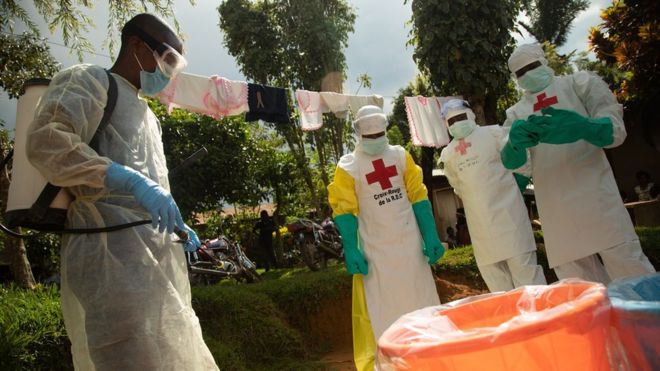 A 50-year-old woman infected with Ebola has died in western Uganda, a day after her five-year-old grandson died.

They are the first two cases reported in the country since the virus spread from neighbouring Democratic Republic of Congo, where nearly 1,400 people have died.

Three suspected Ebola patients have also run away from an isolation centre.

The head of a major medical charity has called the latest outbreak of Ebola in central Africa “truly frightening”.

Dr Jeremy Farrar, the director of the Wellcome Trust, said the epidemic was the worst since that of 2013-16 and has showed “no sign of stopping”.

He said the spread was “tragic but unfortunately not surprising”. He warned that more cases were expected, and a “full” national and international response would be needed to protect lives.

On Friday the World Health Organization (WHO) will decide whether the outbreak should now be deemed a public health emergency.

The grandmother and grandson are said to have travelled across the border to DR Congo on Sunday, where they are suspected to have contracted the virus from an elderly male relative who later died.

The three-year-old brother of the boy who died on Monday – who is confirmed as having Ebola – and four other members of his household have been repatriated to DR Congo, Uganda’s health ministry said on Thursday.

Uganda now has three people being held in isolation because health officials fear they could be infected – their status is being confirmed with blood tests.