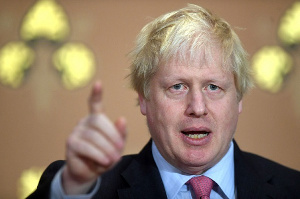 Boris Johnson has called for a renewal of “the ties that bind our United Kingdom” ahead of his first visit to Scotland as prime minister.

During Monday’s visit he will announce £300m of funding for Scotland, Wales and Northern Ireland.

It comes the day after Scottish Tory leader Ruth Davidson said she would not back his plans for a no-deal Brexit.

Mr Johnson has insisted the UK will leave the EU by 31 October with or without a deal.

During his visit to a Scottish military base, Mr Johnson will set out how the latest “growth deals” plan will help communities in Scotland, Wales and Northern Ireland.

Under the plan, the funding will go towards deals in Falkirk, the Islands and Argyll and Bute in Scotland, as well as to parts of Northern Ireland and Wales.

Ahead of his visit, he said: “Our Union is the most successful political and economic union in history. We are a global brand, and together we are safer, stronger and more prosperous.

“So as we prepare for our bright future after Brexit, it’s vital we renew the ties that bind our United Kingdom.

“I’m proud to be in Scotland today to make clear that I am a passionate believer in our great Union, and I look forward to visiting Wales and Northern Ireland to ensure that every decision I make as prime minister promotes and strengthens our Union.”

Mr Johnson also plans to go to Wales to meet members of its farming community and Northern Ireland to discuss ongoing talks to restore devolution at Stormont.

Three new committees have been formed to ensure the UK leaves the EU by the October deadline.

One of them – a “daily operations committee” – is made up of senior cabinet ministers responsible for overseeing all of government’s preparation for leaving, including planning for a no deal.

Meanwhile the CBI warned the government neither the UK nor the EU was ready for a no-deal Brexit on 31 October.

And the chief executive of the company that owns Vauxhall warned the firm might move all production from its Ellesmere Port factory if Brexit makes it unprofitable.

Mr Johnson faces opposition within his own party if he persists with his current Brexit strategy – both from backbenchers in Westminster and the Scottish Tory leader Ruth Davidson.

On Sunday, Ruth Davidson said while Mr Johnson had her “full support” in his efforts to secure a withdrawal agreement with the EU, she did not agree with a no-deal Brexit.

Writing in the Scottish Mail on Sunday, she said: “When I was debating against the pro-Brexit side in 2016, I don’t remember anybody saying we should crash out of the EU with no arrangements in place to help maintain the vital trade that flows uninterrupted between Britain and the European Union.”

While Mr Johnson is keen to be seen as a defender of the Union, the possibility of a no-deal Brexit has brought fresh speculation about the future of the United Kingdom.

Scotland’s First Minister Nicola Sturgeon is reviewing the timetable for a possible second vote on Scottish independence while Mr Johnson has been described as the “last prime minister of the UK” by the SNP.

Both Ms Sturgeon and Mark Drakeford, the First Minister of Wales, have told the prime minister it would be “unconscionable” for the UK to leave the EU without a deal.

Northern Ireland Secretary Julian Smith said he looked forward to “making the most” of the funding, while Welsh Secretary Alun Cairns said he and Mr Johnson were committed to building on the “successes” of the growth deals already in place across Wales.

“This was all in the pipeline anyway, so it’s really recycled finance which is a totally unimpressive announcement from a prime minister that wants to reset a relationship with Scotland.”

The growth deal plan comes after Mr Johnson announced a £3.6bn towns fund over the weekend, which will initially support 100 locations in England.