Sign up for CNN’s Wonder Theory science newsletter. Explore the universe with news on fascinating discoveries, scientific advancements and more.

(CNN)The human story — where we come from and how we evolved — got a new chapter in 2021.Thanks to new fossil finds and analysis of ancient DNA preserved in teeth, bones and cave dirt, scientists have unearthed startling revelations about our Homo sapien forebears, and other humans that existed before — and in some cases, alongside us.Here are six of this year’s most ground-breaking discoveries in human prehistory that are shaping the family tree in fascinating and unexpected ways.

The footprints are thought to be made by children.Footprints made in muddy earth at the edge of a wetland, in what’s now New Mexico, look like they could have been made yesterday.But they weren’t. The discovery that the prints were pressed into the ground between 21,000 to 23,000 years ago has dramatically pushed back the history of humans in the Americas, the last continent to be settled by humans.Until recently, the commonly held view was that people ventured into North America from Asia via Beringia, a land bridge that once connected the two continents, at the end of the ice age around 13,000 years ago.The tracks, thought to have been made by children, were made at a time when many scientists think that massive ice sheets sealed off human passage into North America, indicating that humans were there even earlier.

Dragon man is the latest addition to the human family tree.Described as the most important fossil discovery in 50 years, a cranium, which was hidden at the bottom of a well in northeastern China for more than 80 years, could represent a completely new type of human.The well-preserved skullcap, found in the Chinese city of Harbin, is between 138,000 and 309,000 years old, according to geochemical analysis. It combines primitive features, such as a broad nose and low brow and braincase, with those that are more similar to Homo sapiens, including flat and delicate cheekbones.Researchers named the new hominin Homo longi, which is derived from Heilongjiang, or Black Dragon River, the province where the cranium was found. Colloquially, he’s become known as Dragon Man since the discovery was made public in June.The hope is to extract DNA or other genetic material from the fossil to find out more about Dragon Man, particularly whether he may be a representative of the Denisovans, a little-known and enigmatic human population. Watch this space in 2022.

For centuries, archaeologists have searched caves for teeth, bones and tools in the hope of piecing together how our ancestors lived and what they looked like.Now, new techniques to capture DNA preserved in cave sediment are allowing scientists to learn about our early relatives without ever having to find fossils — just the dirt from the caves where they hung out.In 2021, human nuclear DNA, which contains more detailed information than mitochondrial DNA, was gleaned from cave dirt for the first time, revealing details about the lives of Neanderthals. Similar techniques are shedding light on extinct animals like woolly mammoths. Science magazine named it one of their 2021 breakthroughs.“Screening sediment for DNA is a game changer for us. It will direct us to the right places, save us time and a lot of money,” said Katerina Douka, an assistant professor of archaeological science at the department of evolutionary anthropology at the University of Vienna and a research associate at the Max Planck Institute for the Science of Human History in Germany.

In “The Flintstones,” Fred and Betty are clothed in furs — but archaeological evidence of what our Stone Age ancestors actually wore and how they made clothes is thin.Fur, leather and other organic materials generally aren’t preserved, especially beyond 100,000 years ago.However, researchers say 62 bone tools used to process and smooth animal skins found in a cave in Morocco may be some of the earliest proxy evidence for clothing in the archaeological record. The tools are between 90,000 and 120,000 years old and were used to work leather — specifically to remove connective tissue. Similar bone tools are still used by some leather workers today. 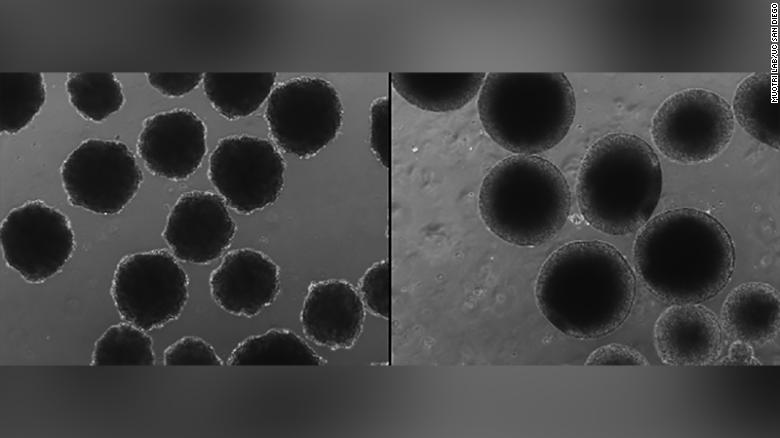 Neanderthal-ized brain organoids (left) look very different than modern human brain organoids (right).Brain matter doesn’t preserve well in the fossil record, making it impossible to know how modern human brains differ from our long-extinct ancestors, the Neanderthals.From fossilized skulls we know that their brains were big — slightly bigger than ours, in fact — but they tell us little about their neurology and development.Scientists from the University of California San Diego came up with an exciting way to begin to answer this question. They have created blobs of brain tissue genetically modified to carry a gene that belonged to Neanderthals and other archaic hominins, but not Homo sapiens.While the research is at a very early stage, the researchers found that the Neanderthalized brain organoids produced significant changes in how the brain is organized and wired.

The oldest story ever told? 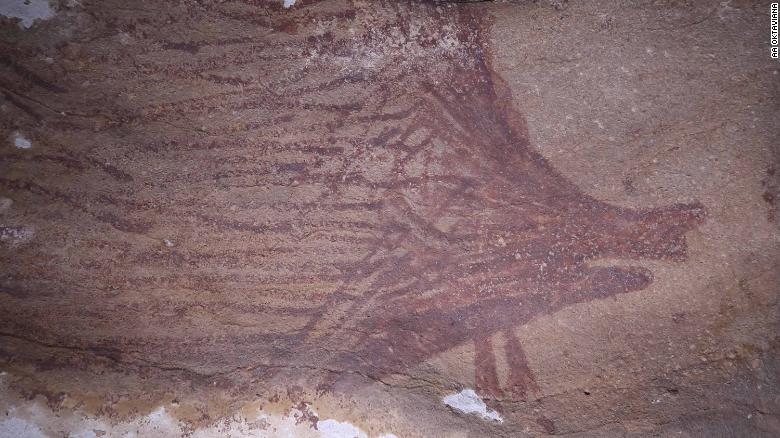 A close-up of one of the three warty pigs.Finally, take a minute to marvel at the oldest known figurative rock art created by humans, which was revealed to the world in January.

Painted in red ocher in limestone caves on the Indonesian island of Sulawesi, it features an endearing warty pig engaged in a fight or some other interaction with two others.It’s at least 45,000 years old and makes these prehistoric Picassos the first known storytellers. It feels fitting that we still tell a tale about three little pigs today.