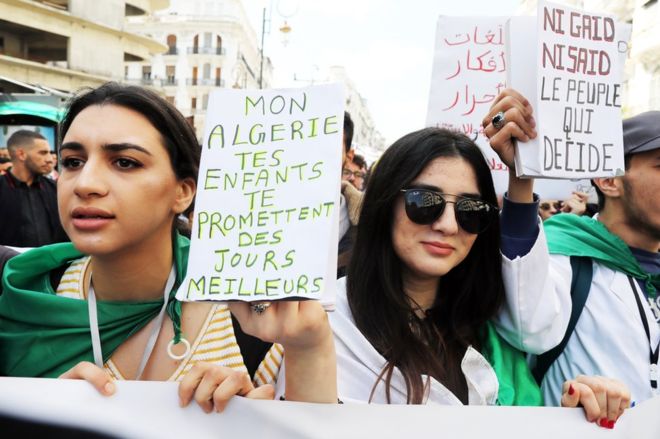 Abdelaziz Bouteflika, the ailing 82-year-old president of Algeria, handed in his resignation on live TV on the evening of 2 April.

Unlike previous promises to resign, this time it was effective immediately.

He was frail and silent. This was one of the very few times he had been seen in public in the last six years since he had a stroke in 2013 that left him partially paralysed and severely speech impaired.

It followed six weeks of peaceful, but increasingly urgent protests across the country, which were characterised by youthful crowds, considerate clean-up projects and witty signs.

Mr Bouteflika had led the country for 20 years – which, in a country where it’s thought about 70% of the population is under 30, makes him the only president many people have ever known.

Nourhane Atmani, 19, tells BBC News that she went to almost all of the recent demonstrations.

“The past couple of weeks have been causing me, and thousands of other Algerians, a lot of anxiety and anger,” she says. “So today, waking up knowing our efforts didn’t go to waste definitely felt liberating. We’ve been waiting for this moment for a long time.”

When Mr Bouteflika first came into power in 1999, the country was in the midst of a bloody civil war that had started in December 1991 and would continue until early 2002. He was largely credited with eventually restoring peace to the nation.

Ms Atmani feels that, because of this, older generations allowed him to stay in power for an unjustifiable amount of time.

“As a kid, every single adult around me would glorify him, as though he’s some sort of god who saved the nation from terrorism, and he’s the saviour everyone has been waiting for after 10 long years of [conflict] for Algeria,” she says.

“So once I grew up and started becoming more politically aware, I honestly was angry at the previous generation – it was them who kept making him out to be this great holy person, it was them who kept him on the chair [in power] and gave him the confidence to never step down.”

She adds that with many of the old guard still firmly in place, the protests are not going to stop.

“When ‘he’ supposedly announced his stepping down, I exhaled for the first time in forever. One down, more to go.”

Fellow protester Abdellah Djelti, 27, agrees that Mr Bouteflika was seen as “a white knight, a saviour” for Algeria in the first few years of his presidency.

“Algeria in the civil war, it was a disaster,” he tells the BBC. “People couldn’t go out – if you went out… you’d find bodies outside.”

Mr Bouteflika, he adds, was seen as the man who stopped this.

But after four terms in office, mired by corruption, allegations of vote-rigging and an increasingly absent leader, people became frustrated.

Instead of focusing on the past, they wanted a leader who could take them into the future – for example, by investing in education.

“Most graduates from universities have no jobs,” Mr Djelti says, “because the government doesn’t give that importance to people’s studies or education, or to scientific research.”

He adds that there are also few, if any, schemes to help students study abroad, and it is otherwise prohibitively expensive for the majority of young Algerians – something that, as an English literature student, he finds particularly hard.

“I had a dream to study abroad, in England or the US, to visit other places. I have this dream to visit other museums because I have a passion for art and history,” he says. “But since the situation here

This is partly why he’s spent almost two months protesting – and he says it felt “so good”. He went from feeling like nothing would ever change to having hope.

“The good thing is it was very peaceful, people were providing water, they were providing food… I felt patriotic asking for our rights, and our voice to be heard.”

Laughing, he adds: “In Algeria nowadays, the Algerian flag is always in your pocket – because you don’t know when you’ll end up in a protest.”

Plogging – with an Algerian twist

Plogging is when people pick up litter and jog at the same time. The idea, for Mr Rahmoune, was that the protesters would help the local environment while they marched.

“We took the same concept and gave it an Algerian touch,” he tells the BBC, adding that he wanted to instil “an environmental consciousness in the minds of Algerians”, while also joining the call for “a new

Even though Mr Bouteflika has stepped down, it’s clear the protests are far from over.

“It’s scary,” Ms Atmani says. “I’m happy [Algerians are now] aware, but then I’m also afraid there’s going to be a major split in ideologies when it comes to choosing who’s to become president.”

Mr Rahmoune agrees, but he’s more hopeful about the future: “We hope to see new faces and more youth in parliament, so we have a lot to do.”