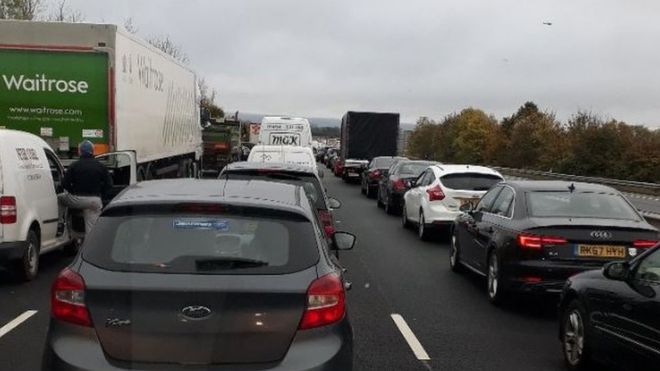 A man who caused a fatal crash by going the wrong way on the M40 was probably suffering from confusion brought on by brain cancer, a coroner said.

John Norton, 80, was driving a Subaru towing a caravan on 15 October when it collided head-on with a Ford Mondeo driven by 32-year-old Stuart Richards.

Both men and Mr Norton’s passenger, Olive Howard, 87, died in the crash.

An inquest in Oxford heard he travelled south on the northbound carriageway for about four miles before the accident.

Despite this Mr Norton continued in the third lane between junctions six and seven, driving at between 60mph and 70mph, and did not attempt to stop or slow down, he said.

Mr Salter told the hearing at Oxford Coroner’s Court that according to friends the retired banker, who lived with Mrs Howard in High Wycombe, had been acting confused in the days before the crash.

Mr Norton also crashed into a parked car on 10 October, and its owner said he was “not fit to drive” when he reported it to the police.

Mr Norton was diagnosed with bladder cancer three years before, which a post-mortem examination showed had spread to his brain, Mr Salter said.

He said this could have caused “impaired cognitive function”, such as making a it harder for him to recognise hazards.

In February – at the same junction – another driver joined the motorway in the wrong direction and new temporary signs have now been installed.

Mrs Howard’s cousin Peter Weatherill said the second incident “highlights that more needs to be done than just putting up a couple of signs”.

Mr Salter said he would write to Highways England and Oxfordshire County Council to ask what permanent measures would be put in place at the junction.

The Independent Office for Police Complaints investigated how Thames Valley Police handled the earlier complaint into Mr Norton’s driving and determined it had followed proper procedures.