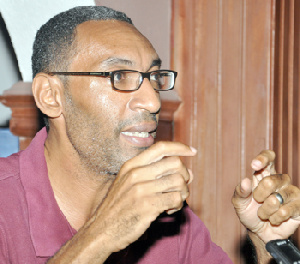 Son of Kwame Nkrumah, Sekou Nkrumah, has attacked a former Gold Coast Politician, Joshua Attoh Quarshie, over allegations that his father cleaned toilets for a living.

Attoh Quarshie made the claims on a Citi TV show saying “Nkrumah used to pump the toilet before he can get his daily bread,” he alleged while giving an unpopular narrative about Nkrumah’s life abroad before returning to Ghana to take the role of UGCC secretary.

Sekou Nkrumah reacted on his Facebook page saying such utterances by Joshua Attoh Quarshie were disrespectful to the legacy of his father.

“What is wrong with cleaning toilets for a living? I clean toilets at home for free… So how can that stupid UP man explain that with no university degree Nkrumah could write 15 solid political books? I mean how? How many books did their doctors and professors combined write?” he wrote.

“…Nkrumah was top of his class, an excellent academic with several university degrees! An exceptional political organizer and orator! A political theorist who shaped the African decolonization process! A legend who put Ghana on the world political map. A hero who made Africa great again!” he added.

Attoh Quarshie went further in the interview to question the education background of Nkrumah by saying “he never studied anything…socialists put all these on Nkrumah…what did he study?”

Mr. Attoh Quarshie said that when the Osagyefo appeared before the Watson Commission, he was asked whether he was a PhD holder to earn the title “Dr”; he (Nkrumah) answered no.

“When they called him ‘Dr Nkrumah’, he appeared before Watson Commission and he was asked ‘Are you a doctor…?’ and he said no. He

trying to write his thesis for Theology,” he said on Citi TV’s Footprint.

When asked if truly Nkrumah never studied in a university in the United States, Mr Attoh Quarshie reiterated that there are crooks who buy some of these degrees from the universities. He added that Kwame Nkrumah’s master was Ako Adjei so it was he (Ako Adjei) who recommended Nkrumah to Dr. JB Danquah and other members of the United Gold Coast Convention (UGCC) to be their General Secretary.