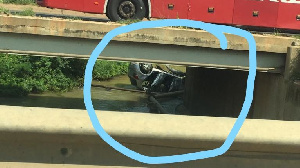 It was a chaotic sight to behold on both sides of the Accra-Tema motorway early Wednesday morning when a car which had run into ditch under the bridge caused a massive traffic jam.

It was unclear how the car ended up in the ditch, but police and fire service personnel could be seen at the accident scene, removing the car, and directing the massive traffic that had built up on the road.

The Tema-Motorway has become deplorable and dangerous, with many potholes, and has put many drivers in danger of driving on the stretch.

Motorists are cautioned to drive carefully, as the police try to ease the unbearable traffic that has caused a standstill.