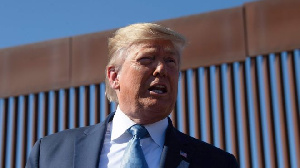 The Judicial House Committee of the United States is voting to approve two articles for the impeachment of President Donald J Trump, after passing the two articles in the house last week.

The two articles passed were: abuse of power and obstruction of Congress.

An approval of the articles as highly expected by the Democratic controlled committee will pave way for a Senate trial.

A successful impeachment of President Trump will make him the third president to be impeached in the last 240 years of the history of the United States of America.

President Trump, who has since described the process as a persecution on Wednesday, raged against the House Speaker, Nancy Pelosi and her colleague Democrats in a letter in which the president accused them of being the ones rather obstructing justice.

The Committee amongst others things are accusing President Trump of withholding a $400 million military aid and an Oval Office visit by new Ukrainian President Volodymyr Zelensky, as a way of forcing the foreign leader into investigating Joe Biden and his son Hunter’s business dealings in the country.

The Judiciary House Committee is expected to approve the two articles by the end of Wednesday, in a vote likely to be cast along party lines.