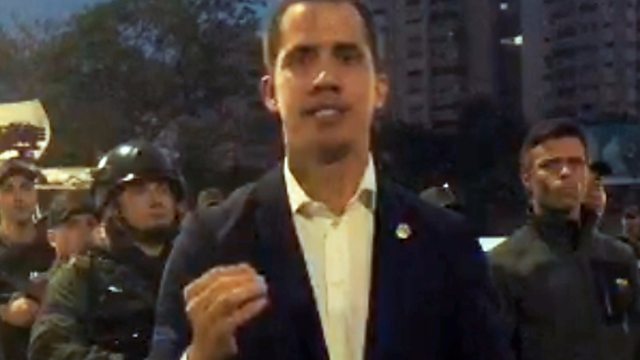 Venezuelan authorities say they are putting down a small coup attempt after opposition leader Juan Guaidó announced he was in the “final phase” of ending President Nicolás Maduro’s rule.

He appeared in a video with uniformed men, saying he had military support.

Mr Guaidó, who declared himself interim president in January, called for more members of the military to help him end Mr Maduro’s “usurpation” of power.

But military leaders appeared to be standing behind Mr Maduro.

Venezuela’s defence minister appeared on television to stress the point. However, photos from Caracas show some soldiers aligning themselves with Mr Guaidó’s supporters.

So far, they have stood by Mr Maduro – despite dozens of countries, including the UK, the US and most of Latin America, recognising Mr Guaidó as Venezuela’s rightful leader.

Protesters supporting both sides have gathered at different points in the capital, Caracas.

There are running clashes between Mr Guaidó’s supporters and armed military vehicles. Protesters were also seen throwing rocks, but being repelled by tear gas and water cannon.

Television cameras also caught the moment armoured vehicles drove into a crowd but it is unclear if there were any injuries.

Meanwhile, Venezuelan Defence Minister Vladimir Padrino said the uprising by some members of the military had been “partly defeated”, but warned of possible bloodshed.

“The weapons of the republic are here to defend the nation’s sovereignty and independence,” he warned.

He also revealed one soldier had suffered a bullet wound.

What sparked the protests?

A three-minute video by Mr Guaidó was published in the early hours of Tuesday. In it, he announced he had the support of “brave soldiers” in Caracas.

“The National Armed Forces have taken the correct decision… they are guaranteed to be on the right side of history,” he said.