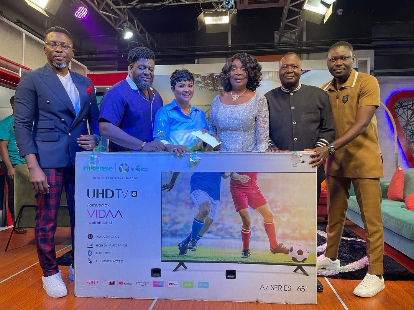 Veteran Ghanaian actress Grace Omaboe, well known as Maame Dokono, has been honoured with mouth-watering gifts for her contribution to the creative arts industry and service to the nation.

She spoke at length about her journey in the movie industry, recounting some of the rosy experiences and bumpy struggles she encountered throughout her career.

In the final minutes of the show, the host, Nana Ama McBrown, unveiled the surprises prepared for Maame Dokono.

Nana Ama, an actress who doubles as a brand ambassador for Hisense, made a presentation to Maame Dokono on behalf of her client and bosses at the Despite Media Group.

The actress who earned the name Maame Dokono after she played a character as a kenkey received a 65″ Hisense TV, Refrigerator and a cash gift of GHS10,000.

She moved on from there to become one of the most sought after actresses of her time when she starred in and produced the 1980s/1990s Akan drama series, Obra, on GTV and also co-hosted an educative storytelling TV program for kids known us By The Fire Side.

Maame Dokono moved on to feature in several Ghanaian movies both Akan and English. She starred in the 2013 short Kwaku Ananse and Children of the Mountain (2016).