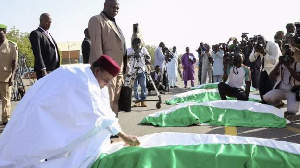 The United States has criticised governments in West Africa’s Sahel region for failing to do more to combat worsening Islamist violence.

The US deputy ambassador to the United Nations Cherith Norman Chalet told the Security Council that Mali in particular had made little progress in implementing a peace deal.

She said West African leaders needed to be more inclusive and accountable.

The Security Council briefing on violent extremism in the Sahel follows an attack last week by The Islamic State (IS) group on a military base in western Niger where 71 soldiers were killed.

It was described as the deadliest raid against the Nigerien military in living memory and Niger’s President Mahamadou Issoufou received the bodies of the dead soldiers publicly on Friday.

The presidents of Niger, Burkina Faso, Chad, Mali and Mauritania have since appealed for international help to combat militant Islamists.

The French president, Emmanuel Macron, will host a meeting of presidents from the Sahel next month.