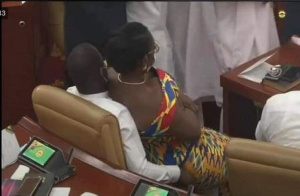 Amid the chaotic and reprehensible scenes from Ghana’s Parliament was a very light and funny photo of the MP-elect for Ablekuma West, Ursula Owusu-Ekuful comfortably sitting on the laps on Kwabena Mintah Akandoh, the MP-elect for Juaboso.

Ursula, dressed in a kente outfit, was relaxed with her arms crossed comfortably on the laps of Akando.

Akandoh explained, in a Joy News interview, how the viral picture came about.

“They saw that we were on the right side when the NPP MPs came in, so they went to the left, but Ursula declined. Sitting back, Cletus Avoka wanted to go to the washroom, and by the time he returned, Ursula had taken her seat.

We attempted to convince her, but she refused. She left that spot, too, and I sat on it. She was just sitting on my lap when she arrived. She said nothing to me, she just sat down, and I said nothing,’ he said.

When she practically clashed with Collins Dauda, the MP-elect for Asutifi South, her relaxed posture was a strong contrast to her posture earlier in the night.

Upon arrival in the chamber, Ursula discovered that the NDC MPs had overtaken the right side of the house that the NPP MPs had previously occupied.

Despite attempts by the management of the NPP to make her sit on the left side, Ursula insisted on sitting with the NDC MPs.

In the meantime, a commotion ensued, and Ursula forced Collin Dauda to the floor, raising tempers in an already charged chamber.