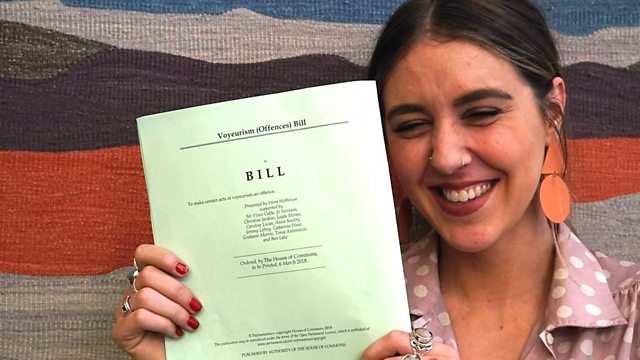 Upskirting is now a criminal offence in England and Wales after a campaign by a woman targeted at a music festival.

Offenders will face up to two years in prison for taking an image or video under somebody’s clothing in order to see their genitals or underwear.

Gina Martin, who led the calls for change, said she hoped the change in law would help people “feel comfortable” to report such crimes.

It is already a specific crime in Scotland but not in Northern Ireland.

How the law was changed

Ms Martin, 27, was waiting to watch the Killers perform at the British Summer Time music festival in London’s Hyde Park in July 2017 when a man put his phone between her legs and took pictures.

After informing the police, she was shocked to discover upskirting was not a specific offence and the case had been closed.

A few days later she wrote about what had happened on Facebook. Her post went viral with other women sharing similar experiences.

Soon an online petition calling for police to reopen the case had received 50,000 signatures.

It wasn’t long before the campaign was picked up by Lib Dem MP Wera Hobhouse.

Encouraged by government ministers, she brought a private members’ bill backing the creation of an upskirting offence.

Her bill was expected to sail through the Commons, but parliamentary rules meant it only required one MP to shout “object” to block its progress.

The bill was was initially blocked by a Tory backbench MP, in a move which was widely criticised.

However, Ms Martin’s campaign secured government backing on 15 July last year and the Voyeurism (Offences) (No. 2) Bill was put before Parliament days later.

The new legislation was approved in the House of Lords and has now passed the formality of Royal Assent to become law.

At the time, Ms Martin said: “To the outsider, the ordinary person, law and politics are complex and daunting. But both are penetrable if you believe in yourself and find the right support.”

She said the experience had been a “steep learning curve” in how the political system works – but that the decision was “politics and society at its best”.