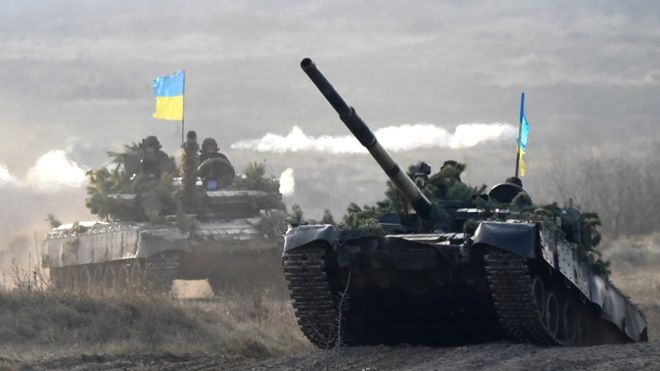 Halyna Yanchenko, a top official at the anti-corruption watchdog Nabu, said “MPs’ immunity must be consigned to the past”. She spoke on Hromadske TV.

Aide Ivan Aparshyn said state defence orders “will be as open as possible”.

Mr Zelensky, a popular comedian, won with 73% of the vote on Sunday.

He made tackling Ukraine’s deep-rooted corruption a major campaign theme, though his political agenda is generally not very detailed.

Quoted by Ukraine’s Unian news agency, she said the bill had been checked by the Constitutional Court.

The immunity issue has been under discussion for years.

Article 80 of Ukraine’s constitution says MPs are “not legally liable for the results of voting or for statements made in parliament and in its bodies, with the exception of liability for insult or defamation.

“People’s Deputies of Ukraine shall not be held criminally liable, detained or arrested without the consent of the Verkhovna Rada of Ukraine.”

Ms Yanchenko complained that “anyone who wants to – the SBU (security service), tax authorities – can investigate economic and financial affairs”.

“We still have tax police! This must all be swept away, so that people can develop and grow the economy,” she said.

Ukraine’s military, quoted by Unian, said a Ukrainian soldier was killed and three were wounded in 14 rebel attacks in the Donbas region. The report spoke of three rebels killed, but the losses were not independently confirmed.

Mr Zelensky wants to hold direct talks with Russia to restore peace in the conflict zone, where the rebels have declared self-rule. An international peace plan remains largely unfulfilled.

Ivan Aparshyn, a defence adviser in Mr Zelensky’s team, told the Ukrainian news website Obozrevatel that the defence ministry budget would be made “as open to the public as possible”.

A major scandal over defence procurement erupted in February, at the height of the presidential election campaign.

It was alleged that the son of an ally of Mr Poroshenko had facilitated corrupt deals involving Russian military equipment sold to Ukrainian forces at inflated prices.

It prompted then-President Petro Poroshenko – defeated by Mr Zelensky in Sunday’s election – to issue a decree ordering reform and transparency in defence procurements.

He also referred to Ukraine’s severe setbacks during the conflict with Russian-backed separatists in the east, notably the losses suffered in Ilovaysk, Debaltseve and Crimea. On that score, he said, “no one is going to hide anything from anyone”.

“Officials who took decisions or did not act where it was necessary to act will be prosecuted,” he said.