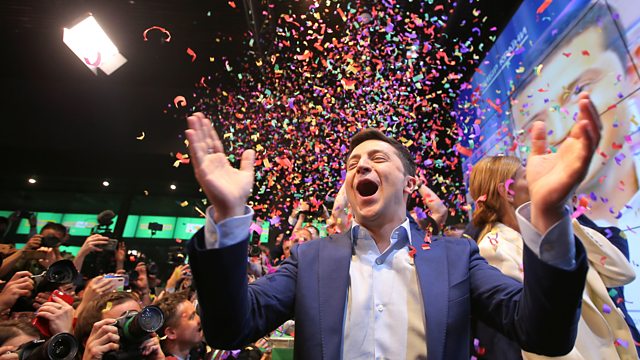 With nearly all ballots counted in the run-off vote, Mr Zelensky had taken more than 73% with incumbent Petro Poroshenko trailing far behind on 24%.

“I will never let you down,” Mr Zelensky told celebrating supporters.

Russia says it wants him to show “sound judgement”, “honesty” and “pragmatism” so that relations can improve. Russia backs separatists in eastern Ukraine.

The comments came from Russian Prime Minister Dmitry Medvedev, in a Facebook post on Monday (in Russian).

He said he expected Mr Zelensky to “repeat familiar ideological formulas” that he used in the election campaign, adding: “I have no illusions on that score.

“At the same time, there is a chance to improve relations with our country.”

Mr Poroshenko, who admitted defeat after the first exit polls were published, has said he will not be leaving politics.

He told voters that Mr Zelensky, 41, was too inexperienced to stand up to Russia effectively.

Mr Zelensky, a political novice, is best known for starring in a satirical television series Servant of the People, in which his character accidentally becomes Ukrainian president.

He told reporters he would “reboot” peace talks with the separatists fighting Ukrainian forces and volunteers in the east.

“I think that we will have personnel changes. In any case we will continue in the direction of the Minsk [peace] talks and head towards concluding a ceasefire,” he said.

There are sporadic skirmishes and the situation also remains tense around Crimea, annexed from Ukraine by Russia in 2014.