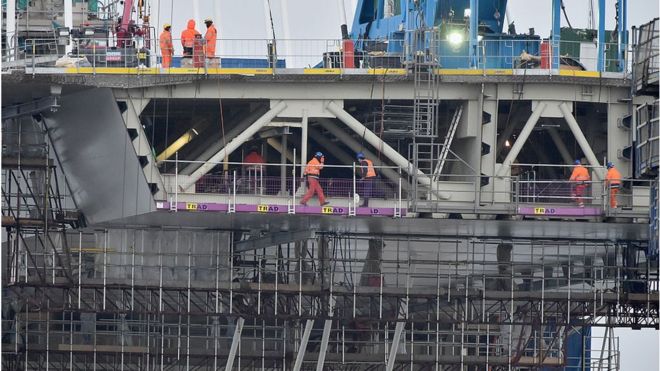 Stockpiling by manufacturers ahead of Brexit helped the UK economy grow by 0.3% in the three months to February.

The Office for National Statistics pointed to manufacturers “changing the timing of their activities” as the UK’s exit from the EU approaches.

Although growth was stronger than the 0.2% many economists forecast, Rob Kent-Smith, head of GDP at the ONS, said growth “remained modest”.

On a monthly measure, the economy grew by 0.2%, faster than the 0% forecast.

“Services again drove the economy, with a continued strong performance in IT. Manufacturing also continued to recover after weakness at the end of last year with the often-erratic pharmaceutical industry, chemicals and alcohol performing well in recent months,” said Mr Kent-Smith.

The ONS said production industries expanded by 0.2% in the three months to February 2019. This was the first positive three-month growth since October 2018.

It said there had been external evidence “that some manufacturing businesses have changed the timing of their activity as we approached the original planned date for the UK’s departure from the European Union”.

“Although the ONS does not routinely collect detailed data on the reasons behind the behaviour of businesses, as part of our survey validation we have found some qualitative evidence that supported this view but were unable to quantify its impact,” it added.

The ONS pointed to the closely-watched survey by IHS Markit/CIPS which showed UK factories were stockpiling goods for Brexit.