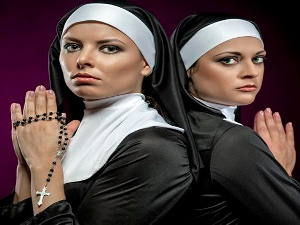 Two Catholic nuns have become pregnant after working in Africa.

According to Daily Mail, the situation has prompted the church to launch an investigation into how the nuns got pregnant despite their vows of chastity.

The two women, who belonged to separate religious orders in Sicily. One of the women, a mother superior (a senior monastic) is several weeks pregnant. She is originally from Madagascar and had been caring for the elderly at an institute in Ragusa.

The other woman discovered her pregnancy news when she complained of stomach pain.

“There is consternation at this news,’ said a church source in Rome, where the Catholic Church has its headquarters.

“It appears that both women were back in their home nations and obviously had some form of sexual encounter.

“An investigation has been launched. They both breached strict rules of chastity but the welfare of their children is uppermost.”