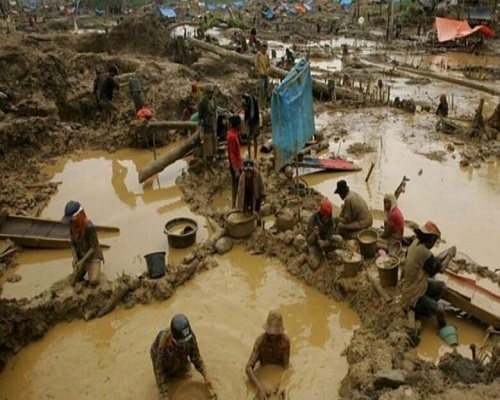 The Deputy Minister for Lands and Natural resources who double as Member of parliament for Tarkwa Nsuem, Hon. George Mireku Duka has stated that Twenty Six suspected illegal operators have been arrested at wasa Akropong of the western Region during operation halt illegal mining activities.

According to him, a total of 265 assulted illegal mining items, one motor bike, and 22 mobile phones were retrieved from the illegal operators and destroyed within the redzone.

Addressing the media on the recent developments at the mining sector today, indicated that the attention of the operation which begun on Saturday 4th- Monday 6th December 2021was on River Ankobra and tributaries which aimed to clear recalcitrance illegal miners on major river bodies.

Moreover, four phases of operation halt illegal mining are going to be launched where phase 1 will target Pra River along western and central Regions, phase 2 on the Oda river and river offin in that Ashanti Region, phase 3 on River Ayensu and Birim in the Eastern Region and phase 4 on Ankobra River and it’s tributaries in the western enclave to deal with all illegal mining in the country and also sound a word of caution to all illegal miners who operate at night to be very careful because they are coming after them.