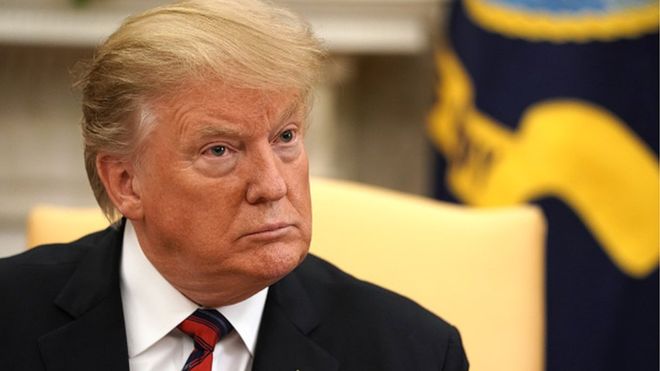 Donald Trump has voiced his opposition to plans for Special Counsel Robert Mueller to testify before Congress.

The US president has previously said he would not block Mr Mueller from testifying, leaving the decision to Attorney General William Barr.

The 448-page Mueller Report found no evidence of collusion between Russia and Mr Trump’s 2016 election campaign.

His testimony, however, may give Congress access to new information otherwise hidden by redactions.

“There was no crime, except on the other side (incredibly not covered in the Report), and NO OBSTRUCTION,” President Trump tweeted on Sunday. “No redos for the Dems!”

Mr Mueller has previously hit out at Attorney General Barr over his summary of the report, which he says misrepresented key findings.

Congressional Democrats have issued a subpoena for the full report, but the Justice Department has so far refused to comply, calling it “premature and unnecessary”.

Mr Barr has until 09:00 ET (13:00 GMT) on Monday to present an un-redacted version to the Democratic-led House Judiciary Committee, along with underlying evidence from the 22-month investigation. Mr Barr missed an initial deadline to provide it last week, and risks being held in contempt of Congress if today’s is missed too.

“But the members of our committee need to see the full report and the supporting documents so we can continue to do our work [and] conduct oversight in a sober and responsible way.”

Tension between Mr Barr and congressional Democrats is already high. Earlier this month, the Attorney General refused to testify to the Democratic-led House Judiciary Committee after Democrats insisted he be questioned by a staff lawyer.

Senior Democrats have called on him to resign, while Republicans have argued that Mr Barr is being targeted for political gain.