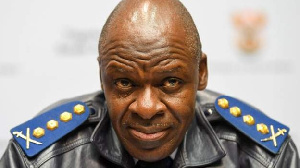 “Actually it was not a break-in. However, two television sets were stolen,” Brigadier Vish Naudi was quoted by South Africa’s privately owned IOL news site as saying.

“The national commissioner’s house is currently under construction and therefore we are exploring certain possibilities. We believe that this was purely opportunistic.”

Gen Sitole was apparently in the parliamentary capital, Cape Town, when the thieves struck at his home in eastern Mpumalanga province, IOL reported.

The police boss has become a victim of crime at a time when he is under intense pressure to bring down high crime levels in South Africa.