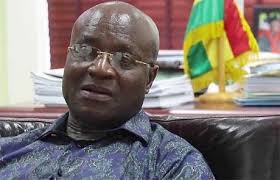 The majority leader in the 7th Parliament clarified on GHToday on GHONE TV on Thursday that the decision by the Fomena MP to do business with the NPP caucus clearly shows that they will have parliamentary majority numbers.

He also denied reports that the meeting with the Speaker ended inconclusivelyon Tuesday and Wednesday, although some decisions still have to be ironed out.

The NDC and the NPP have participated in never-ending discussions over whohas the vote and is entitled to sit on the Speaker’s right side.

Without a simple majority, both the NPP andthe NDC have 137 seats each in the assembly.

Although the Fomena MP told the media that he was going to workwith the NPP, no official correspondence to Parliament to that effect was issued.

The letter read: ‘I, Andrew Asiamah Amoako, an independent MP for the Fomena constituency, and now the second Deputy Speaker for the same Parliament,

hereby announce that I will be affiliated with the NPP caucus in the 8th Parliament for the purpose of transacting business in the house.’

“In order to avoid doubt, I hereby affirm that I shall collaborate and collaborate in parliament with the NPP caucus,” it said.