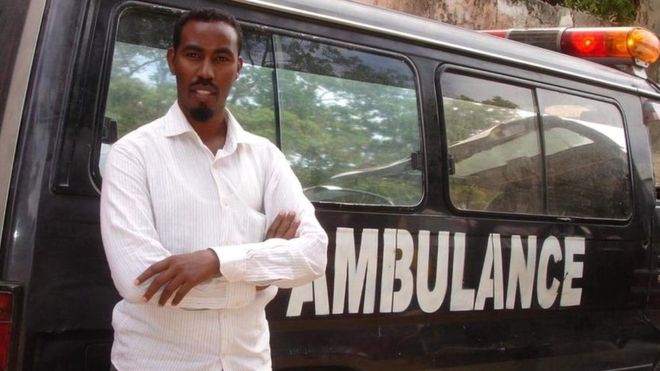 Somalia’s capital city – where there are frequent and deadly bomb blasts – only has one free ambulance service, which was founded by Abdulkadir Abdirahman Adan 13 years ago.

When he returned from Pakistan, where he had been studying dentistry, to Mogadishu as a fresh graduate he was struck by the lack of ambulances on the busy streets – and people using wheelbarrows to ferry the sick to hospital.

The very few ambulances that did exist and respond to calls came from private hospitals and patients had to pay for their collection.

So not long after his return, Dr Adan decided to start an ambulance service.

He started to operate the minibus, carrying the wounded, injured and the heavily pregnant to the hospital.

Such was the demand for the service that he realised it needed to expand and he began frequenting the city’s open-air markets and corner shops, looking for potential donors.

“I managed to convince a group of local entrepreneurs to chip in and buy us another minibus,” he says.

At the time Dr Adan was a part-time tutor at a couple of universities in the city.

“I asked my students if they wanted to save a life and if they did, to donate a $1 (£0.75) a month to help save our brothers and sisters,” he says.

Soon everywhere he went, he began to ask people to contribute a $1 a month to help run Aamin Ambulance.

“Aamin” means “trust” in Somali – and most residents of the city feel it has lived up to its name in a society failed by its politicians.

Today Aamin Ambulance, which survives on donations, has a staff of 35 people. Many of them are volunteers and students, Dr Adan says.

The volunteers are not paid a salary but some of their expenses, such as transportation, are covered.

The service has a fleet of 20 ambulances and a driver for each vehicle.

“We operate on donations. We don’t receive any funding or help from the government.

“A while ago, we asked the Mogadishu mayor’s office if they could assist us with 10 litres of petrol a day but we are still waiting to hear about that.”

But Dr Adan has been able to attract some backing from the United Nations.

“WHO [the World Health Organization] bought us two cars. UNDP donated some walkie-talkies,” the 45-year-old says.

“We bought second-hand ambulances from Dubai and had them delivered here. Recently, the British embassy in Mogadishu organised a half-marathon to raise funds for our service.