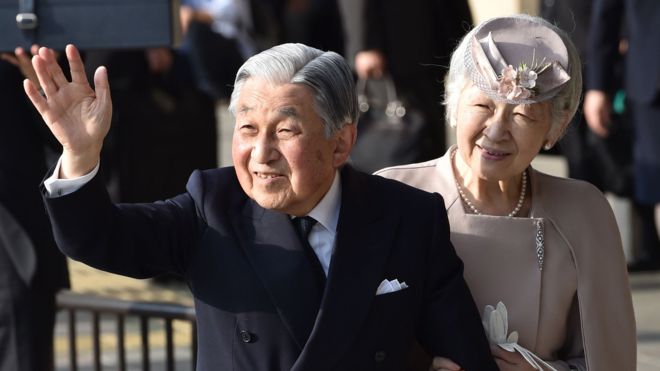 On a beautiful spring morning last week, I stood on a street corner on the western outskirts of Tokyo. For hundreds of metres in each direction, the road was lined, three-deep, with eager, excited faces. Then, with almost no warning, a large black limousine approached over a bridge, motorcycle outriders on either side.

As the car slipped by, for a few brief moments, we could see Emperor Akihito and Empress Michiko leaning forward waving gently. A ripple of applause and waving of plastic flags from the crowd, and they were gone.

To me, it all seemed a little anti-climactic. And I was not alone. Nearby an elderly lady was chastising a policeman.

“Why did they go so fast?” she demanded to know. “Usually they drive much slower than that. We hardly got any chance to see them.”

The policeman smiled patiently. Clearly, he had no control over the speed of the motorcade.

I had expected a few hundred hardcore groupies to turn out for this final visit by the royal couple to the imperial tombs. Instead there must have been 5,000 or more. Some were dabbing away tears as the crowds began to disperse.

“I am grateful for what they have done for the Japanese people,” said a lady wearing an exquisite spring kimono. “I waved at them with the feeling of deep gratitude for all these years.”

“I am really moved,” said her friend. “I hope he can rest and have a peaceful life after so many years on duty.”

Kaoru Sugiyama, wearing a large floppy sunhat, had also come with a group of friends.

“I am not from the generation that experienced the war,” she said. “But when you look back, it is the emperor that has kept peace in Japan through his reign. So I wanted to come and see him on his last visit, to show my gratitude. I wanted to tell him, ‘thank you’.”

What is it that Emperor Akihito has done to inspire such feelings?

The consoler in chief

In January 1989, upon his father’s death, Emperor Akihito succeeded to the Chrysanthemum Throne.

It was an optimistic time. Japan was rich, at the height of its post-war economic boom. Sony was about to buy Columbia Pictures and Mitsubishi was on the verge of buying the Rockefeller Center in New York. The talk, in much of the world, was of Japan the new “superpower”.

But a year into his reign, calamity struck. The asset bubble burst and the Tokyo stock market collapsed, losing 35% of its value. Nearly 30 years on, Japanese stocks and land prices are still below 1990 levels.

For most Japanese people the Heisei era – the name means “achieving peace” – has been one of economic stagnation. It has also been one marked by tragedy.

In January 1995, a 6.9 magnitude earthquake ripped through the city of Kobe, toppling buildings and motorway viaducts and starting fires that burned for days, turning the sky above the city black. Around 6,000 people were killed.

In 2011, an even more devastating quake hit off the north-east coast. At magnitude 9, it was the fourth largest earthquake ever recorded. It unleashed a giant tsunami that smashed into the coast of northern Japan, sweeping away whole towns and killing nearly 16,000 people.

It was after that second disaster that Emperor Akihito did something no emperor had ever done before. He sat down in front of a TV camera and spoke directly to the Japanese people.

Two weeks later, the emperor and empress arrived at an evacuation centre in a stadium outside Tokyo.

People were camped on the floor, a few meagre possessions piled around them. Most had fled the radiation cloud ejected from the damaged nuclear plant in Fukushima. They had left almost everything behind, unsure of when, or if, they would be able to return to their hometowns.

The emperor and empress knelt on the ground with each family in turn, talking to them quietly, asking questions, expressing concern.