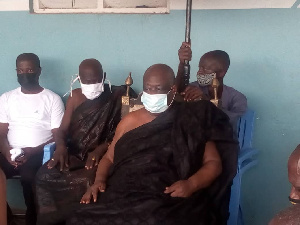 According to him, during Mary Boatemaa Maafo’s tenure, she had some problems with the Member of Parliament and the people in the area, which had an effect on the growth of the area, so he pleaded not to bring her back as the DCE.

We [President Akufo-Addo] plead with you that Mary cannot be the DCE. She is not willing to work here with the MP. We had so many issues during her term that she threatened to go to court without heeding calls from the chiefs and people of Effiduase, Nana Adu Ameyaw said at a press conference.

The Sekyere East Direct, he added, needs someone who is professional, respectful and understands the chiefs and the people of Effiduase.

Our only problem is seeing Effiduase’s growth. We haven’t been able to elect a President, so we need someone who is capable to do his job. Now that we have the MP from Effiduase, all we need is to improve Effiduase because we are missing from behind.

“Nana Adu Ameyaw stressed, “We plead with you, Mr President, to have mercy on us and to nominate someone who is very professional and respects the views of the chiefs and the people of Effiduase.

In the run-up to the elections, Mary Boatemaa Marfo was shot by the President for allegedly vowing during the December 7 polls to reduce the NPP’s votes in the Effiduase-Asokore Constituency.

In a leaked recording, in a conversation with a party member, the DCE was heard saying that on election day it would frustrate voters, which in turn would reduce the votes of Dr Nana Ayew Afriyie, the NPP and the MP.

But the president, to the surprise of those in the area, later rescinded his decision.