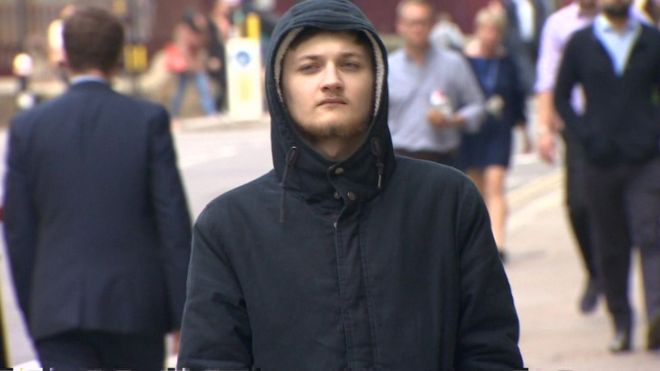 A teenage neo-Nazi who suggested Prince Harry should be shot for marrying a woman of mixed race has pleaded guilty to terror offences at the Old Bailey.

Michal Szewczuk, 19, of Leeds, admitted two counts of encouraging terrorism and five of possessing documents useful to a terrorist.

The charges relate to a neo-Nazi group called the Sonnenkrieg Division.

Both of them were granted conditional bail and are due to be sentenced at the Old Bailey on 17 June.

The pair produced Sonnenkrieg propaganda that, among other things, said Prince Harry was a “race traitor” who should be shot, and lionised the Norwegian mass murderer Anders Breivik.

They publicised the propaganda on the social media site Gab, including on a page for the Sonnenkrieg group itself.

Szewczuk, hiding behind a pseudonym, also used a separate account to posts links to self-authored diatribes that called for the “systematic slaughtering” of women and the rape of babies.

Szewczuk and Dunn-Koczorowski were arrested the morning after a BBC investigation exposed the group’s activities.

Another man was also arrested and has since been released under investigation.

The group’s ideology, which is influenced by figures such as the murderous cult leader Charles Manson, is a strain of neo-Nazism that openly encourages criminality and acts of terrorism.

The Sonnenkrieg Division grew out of a split in the now largely defunct System Resistance Network, which was created after the neo-Nazi group National Action was banned under anti-terror laws in 2016.