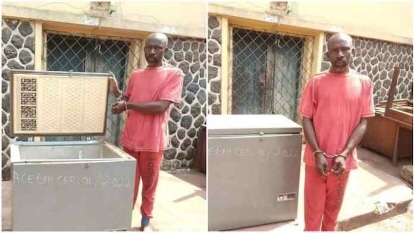 Shocking as 52 year old father k!lls all his three children, hides their bodies in the fridge

The police in Enugu have arrested one Ifeanyi Amadikwa, 52, for allegedly k!lling his children and dumping their bodies in a spoilt deep freezer

The Cable reported that the police said two of the children were fathered by the suspect while the third child was his step-daughter.

Information gathers that the children were left in the custody of the suspect on Tuesday, January 4 by their mother, who left for the market.

Daniel Ndukwe, spokesperson of the Enugu police command, in a statement on Wednesday, January 12, said the children were found in the fridge with bruises during a search.

According to the police, the suspect drew the mother’s attention to the said fridge when the latter was searching for the children.

Ndukwe stated that the lifeless bodies of the children were eventually “found in the fridge with bruises, suggesting that they may have been murdered and dumped in the fridge.”

The bodies were immediately moved to the hospital where they were confirmed dead by medical doctors on duty, and deposited in the mortuary for preservation and autopsy.