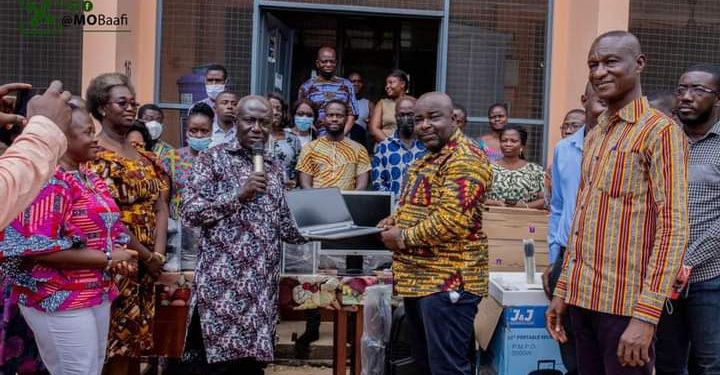 The Member of Parliament for New Juaben South and Deputy Trade Minister, Micheal Okyere Baafi, has expressed concern about the poor performance of Basic Education Certificate Examination (BECE) candidates in his constituency.

Mr. Okyere Baafi said education remains his topmost priority and that he will do all he can to improve the situation.

Speaking to Citi News after donating desktop and laptop computers, among other items, to the New Juaben South Municipal Education Directorate, Mr. Baafi said “academic performance in the BECE especially has not been desirable over the past years, and I am very passionate to help change the paradigm.”

He added that, with the president’s priority being education, he will do his best to improve education in the area.

“We have a President who has made education his priority and has introduced the free SHS. Me, as an MP and Deputy Minister, l will do my part to make this a reality.”

Data suggests that the performance of students in the BECE has consistently been poor in the municipality, and this has become a major concern for stakeholders in education.

Mr. Baafi, who is one of the people concerned about the situation said, “even if it would take me to sell my personal Toyota land cruiser [V8] car to acquire iPhones for 100 pupils who will get distinction in the next Basic Education Certificate Examinations (BECE), I would do so”.

He called on all and sundry to help address the situation.

“I pray and wish for the steadfast commitment of teachers and the education officers in the constituency to help achieve the desired improvement in the pupils’ performance in the BECE. All hands should be on deck” he said.