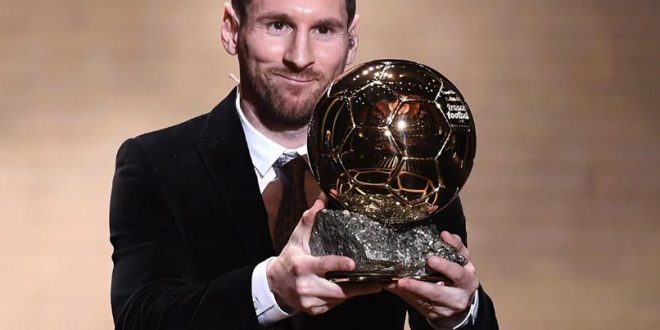 Lionel Messi has made history this evening by winning a SEVENTH Ballon d’Or! What a player he is! Is he the greatest of all time? His record in this award certainly suggests so!The 34-year-old won this award for the first time back in 2009. Luis Suarez is now on stage to hand Messi the trophy.

Lionel Messi has won an historic seventh Ballon d’Or after picking up the prestigious individual award at a ceremony in Paris.The 34-year-old has now won the Ballon d’Or in 2009, 2010, 2011, 2012, 2015, 2019 and 2021, meaning he has lifted the prize handed to the best player in world football more times than any other male player in its history, two clear of Cristiano Ronaldo.Messi beat out Robert Lewandowski who finished in second place and Chelsea midfielder Jorghino who was ranked third in the voting.| OFFICIAL: Barca legend, Leo Messi, has won the 2021 Ballon d’Or!2009: Leo Messi2010: Leo Messi2011: Leo Messi2012: Leo Messi2015: Leo Messi2019: Leo Messi2021: Leo MessiCongrats GOAT! You are the best EVER! #BallonDor

Chelsea are Club of the Year

2021 was a memorable one for Chelsea and they have been handed the award for the Club of the Year!Of course, Thomas Tuchel’s team won the Champions League and are top of the Premier League while Emma Hayes’ side made the final of the Women’s Champions League last season.

Two Chelsea players in the top five of the 2021 Ballon d’Or! N’Golo Kante is ranked fifth with Jorginho, who had been tipped to win the award after success with Chelsea and Italy, in third place!Karim Benzema split the two after an exceptional year for France and Real Madrid!

Italy and PSG goalkeeper Gianluigi Donnarumma has won the 2021 Yashin Trophy, beating out Chelsea’s Edouard Mendy who had been tipped for the award.Donnarumma won the Best Player award at Euro 2020 and made the switch from AC Milan to the French capital in the summer.

There will be no sixth Ballon d’Or for Cristiano Ronaldo this evening with the Portuguese forward finishing sixth in the ranking!

Kevin de Bruyne has been ranked sixth in the Ballon d’Or voting with Mohamed Salah in seventh place! Both players have enjoyed brilliant years with Salah arguably in the form of his life right now!Of course, de Bruyne helped Manchester City to their third Premier League title in four years.

Barcelona Femeni’s Alexia Putellas has won the 2021 Women’s Ballon d’Or following an exceptional season which saw her help her club to the 2020/21 Champions League title!Jennifer Hermoso finished in second place in the voting with Chelsea’s Sam Kerr rounding off the top three!

Mbappe has been ranked ninth in the Ballon d’Or voting with Gianluigi Donnarumma in 10th. The former has been in excellent form for PSG in Ligue 1 and the Champions League.Donnarumma found his best form for Italy during Euro 2020 with the goalkeeper awarded the prize for the tournament’s best player!

Lewandowski is Striker of the Year!

Bayern Munich and Poland striker Lewandowski has won the Striker of the Year award! He enjoyed an excellent 2021, breaking Gerd Muller’s long-standing record for the most Bundesliga goals in a single season!Will Lewandowski add the Ballon d’Or trophy itself to his haul this evening?

Pedri has won the Kopa trophy handed to the best male player age 21 or under. It’s certainly true that the teenager had an incredible year for Barcelona and Spain!Bukayo Saka came sixth in the voting with Mason Greenwood fifth and Jude Bellingham in second place!