The Ashanti Regional capital, Kumasi is getting ready to host the New Patriotic Party’s (NPP) Annual National Delegates Conference from December 18 to 20, 2021.

Fliers of the party have been laced through major roads in Greater Kumasi, especially those leading to the Baba Yara Stadium, the venue for the three-day event.

Major roundabouts such as the Airport Roundabout, Santasi and Suame, as well as the Sofo Line Interchange, have all been inundated with NPP fliers and billboards.

Although the party has placed a ban on campaign posters of aspirants to national office positions and the flag bearer position of the party, supporters and sympathisers of some of the aspirants have mounted posters and billboards of their preferred candidates.

The situation has warranted the Ashanti Regional Minister, Mr Simon Osei Mensah, to direct all assemblies to remove all billboards.

“I am requesting anyone who has mounted or pasted any of such items within the region to remove them latest by 12 midnight on December 15, 2021,” he told the Daily Graphic in an interview last Tuesday.

He said he would be left with no option than to cause the removal of the billboards and posters if they failed to comply with the directive by the deadline.

On security arrangements, the minister hinted that the Regional Security Council (REGSEC) had put adequate measures in place to ensure the safety of all delegates before, during and after the conference.

“We will have a successful conference,” he assured Ghanaians.

Ahead of the Kumasi conference, the NPP had placed a ban on all activities associated with internal party contests, parliamentary and presidential primaries, as well as the display of paraphernalia and advocacy of aspirants at the conference venue.

Prior to and during the conference from December 18 to 20, 2021, no billboards and or signboards, banners or any kind of outdoor signage with the images and or names of individual members, with or without the consent of the individual, shall be acceptable. This applies to the area within the Greater Kumasi Metropolis. All such displays, if put up already, should be removed,” a statement issued by the party said.

The statement, signed by its Director of Communications, Mr Yaw Buaben Asamoa, said the decision was taken at a meeting of the National Steering Committee of the party last Thursday.

It said no T-shirts, flyers, brochures and/or souvenirs, branded and or embossed with the portraits and names of individuals shall be allowed within the precincts of the conference, including but not limited to places of accommodation for delegates.

“Any person, with or without his or her consent, whose image is flaunted on any advocacy material and who does not take active steps to desist from any public display of aspiration for a position within the precincts of Greater Kumasi runs a higher risk of disqualification in the event nominations are declared open,” it said.

It said the 2021 National Annual Delegates Conference was a time of renewal for the party. 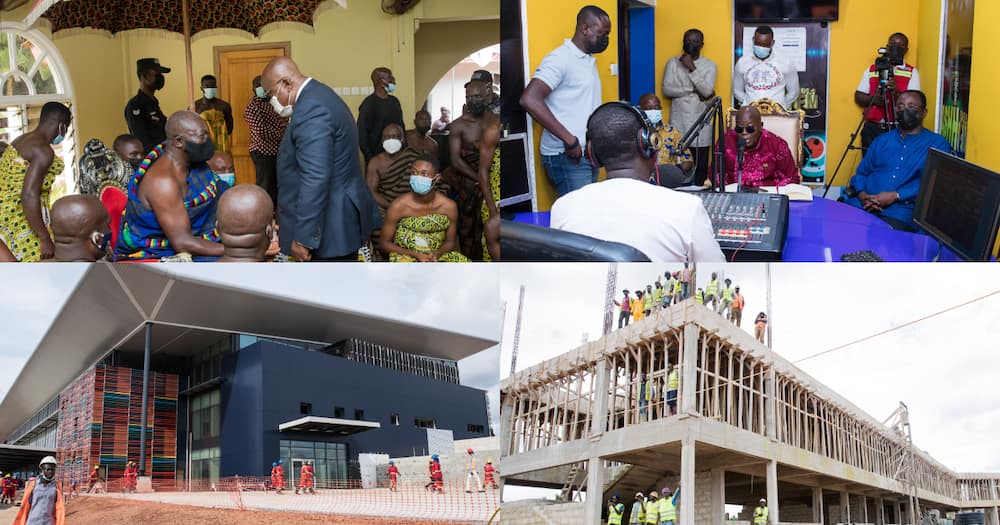 1. Akufo-Addo paid a courtesy call on the Asantehene, Otumfuo Osei Tutu II, where I thanked him and Asanteman for the strong support in the run-up to the 2020 elections.

2. Inspected ongoing works on the construction of the Kumasi International Airport, which, according to the contractor is expected to be completed in June 2022.

3. Akufo-Addo was in the studios of Ashh FM where he talked about a lot of things including the coup in Guinea and its effects as well as ECOWAS sanctions.

4. He inspected the processing plant of Darko Farms, which has been revitalised by the 1-District-1-Factory policy.

6. He inspected ongoing work on the construction of the J.A. Kufuor Senior High and Technical School.

7. Akufo-Addo inspected ongoing work in the Abuakwa-Tanoso Road; visited the site of the Creative Arts SHS in Kwadaso.

8. Inspected ongoing work on the construction of the Ohwimase-Twedie Road in the Atwima Kwanwoma Road.

9. The president also worshipped with congregants at the Church of Pentecost, McKeown Temple.

11. Inspected ongoing work on the construction of the 250 capacity Regional Hospital at Sawua.

12. Inspected ongoing work on the construction of the Dompoase Junction to Aputuogya Road.

14. Inspected work on the Bekwai Hospital, which is nearly complete.

Alan Kyeremanteng and Afriyie Akoto are eyeing my seat

President Nana Addo Dankwa Akufo-Addo has revealed that his ministers for Trade and Industry as well as Agriculture, Alan Kyeremanteng, and Afriyie Akoto both have their eyes on his seat. Akufo-Addo seemed to have announced contenders for the next leader of the New Patriotic Party (NPP) as his tenure comes to an end. Both ministers have reportedly harbored ambitions to become the flagbearer of the ruling party according to a report filed by 3news.com.