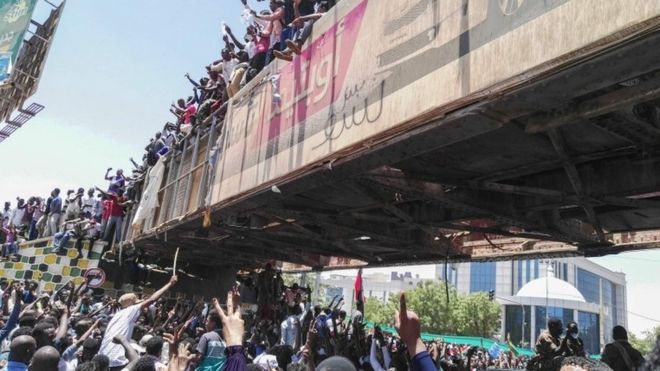 Elements of Sudan’s military moved to protect demonstrators during deadly clashes in Khartoum between security forces and protesters, witnesses say.

Soldiers tried to chase away pick-up trucks firing tear gas, on the second night of a sit-in protest calling for President Omar al-Bashir to resign.

Protesters sought shelter in a navy facility, a witness said, as tension among the armed forces was laid bare.

Seven protesters have been killed since Saturday, officials say.

Mr Bashir, who has been in power for nearly 30 years, has so far refused demands to make way for a transitional government.

What happened on Sunday night?

One protester told the BBC’s Newsday programme that a number of pick-up trucks arrived and began firing tear gas and live ammunition at the thousands of sit-in protesters in the Sudanese capital.

She said the military was at first neutral but then tried to chase the security forces away.

It is unclear who the security forces were but BBC Africa editor Fergal Keane says reports indicate they included agents from the powerful National Intelligence and Security Service (NISS).

The eyewitness said the security forces returned for a second attack and people then ran towards a navy facility to seek shelter from the prolonged firing.

Ali Ibrahim, of the Sudanese Professionals Association (SPA), which has organised the protest, told EFE news agency that military units had fired into the air to prevent security forces from dispersing the sit-in.

Video on social media showed protesters hiding behind walls as shots ran out.

The sit-in has been taking place outside the army HQ and AFP news agency quotes witnesses as saying the army has now deployed troops around the building and is setting up barricades in nearby streets. The army’s intentions surrounding the protest remain unclear.

Information Minister Hassan Ismail said the protesters in front of the HQ had been “cleared completely”.