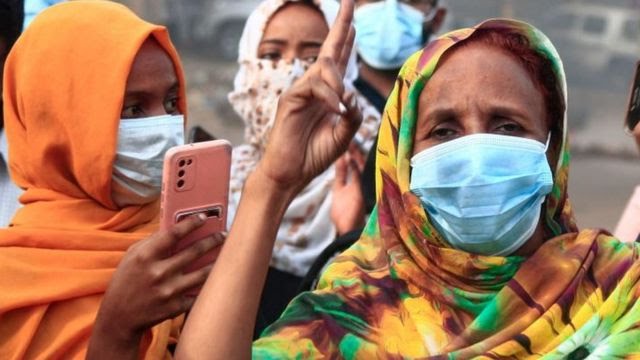 A coup is under way in Sudan, where the military has dissolved civilian rule, arrested political leaders and declared a state of emergency.

Protests have erupted in several cities including the capital Khartoum. Three people are said to have died after being shot by the armed forces.

Military and civilian leaders have been at odds since long-time ruler Omar al-Bashir was overthrown two years ago.

Large numbers of protesters are on the streets of the capital demanding the return of civilian rule, BBC Arabic’s Mohamed Osman reports from Khartoum.

More protesters are expected to join the crowds after calls for action by political parties and professional unions, our correspondent says. Doctors have refused to work at hospitals and institutions under military rule, except in emergencies, he adds.

One demonstrator, Sawsan Bashir, told AFP news agency: “We will not leave the streets until the civilian government is back and the transition is back.”

“We are ready to give our lives for the democratic transition in Sudan,” fellow protester Haitham Mohamed said.

Army and paramilitary troops have been deployed across Khartoum, the city’s airport is closed and international flights are suspended. The internet is also down.

At least three people have been killed and 80 have been injured, the Sudan Central Doctor’s Committee wrote on its Facebook page. Those who died had been shot by soldiers, it said.

Video footage from Khartoum on Monday showed large groups in the streets, including many women. Barricades of burning tyres can be seen, with plumes of black smoke rising in various parts of the city.

“There is tension and also violence because people tried to go to the army headquarters… they were met with gunshots”, human rights defender Duaa Tariq told the BBC. She added there was fear and confusion in the streets, but also solidarity between the protesters.

World leaders have reacted with alarm to the military’s move.

Prime Minister Abdallah Hamdok and his wife are among those reported to have been detained and put under house arrest, along with members of his cabinet and other civilian leaders. Their whereabouts are unknown.

They are part of a transitional government designed to steer Sudan towards democracy after the rule of former president, Omar al-Bashir.

Mr Hamdok was reportedly being pressed to support the coup but was refusing to do so, and instead he urged people to continue with peaceful protests to “defend the revolution”.

Gen Burhan had been leading the power-sharing arrangement between military and civilian leaders, known as the Sovereign Council.

In a televised address, he said infighting between politicians, ambition and incitement to violence had forced him to act to protect the safety of the nation and to “rectify the revolution’s course”.

He said Sudan was still committed to “international accords” and the transition to civilian rule, with elections planned for July 2023.

But a senior official from the prime minister’s office, Adam Elhiraika, told the BBC the coup could lead Sudan back into a civil war, adding the risk was “extremely high”.

Although Sudan remains in a deep economic crisis, it had been receiving more international support. A military takeover will put that at risk.

The UK’s special envoy for Sudan and South Sudan, Robert Fairweather, tweeted that military arrests of civilian leaders were “a betrayal of the revolution, the transition and the Sudanese people”.

The African Union, of which Sudan is a member, said it had learned with “deep dismay” of the situation, and called for the “strict respect of human rights”.

The US, EU, UN and Arab League have also expressed deep concern.

The military and civilian transitional authorities have ruled together since 2019, when President Bashir was toppled after months of street protests.

The power-sharing deal between the military and a loose coalition of groups – the Forces for Freedom and Change – saw the launch of the Sovereign Council.

It was scheduled to rule the country for another year – with the aim of holding elections and transitioning to civilian rule.

But the deal was always fractious, with a large number of rival political groups – and divisions within the military too.

Tensions grew further after a coup attempt attributed to followers of Mr Bashir was foiled in September.

Sudan has been unable to find a workable political system since independence in 1956 and has seen numerous coups and coup attempts.

Recent weeks have seen a rapid build-up of tension in Khartoum. A hostile takeover of power is what many in Sudan and beyond have feared could happen anytime. The signs have been all too clear.

A pro-military sit-in right in front of the presidential palace in Khartoum was seen as choreographed to lead to a coup. No attempt was made to disguise its purpose. The protesters demanded that the military overthrow “failed” civilian leaders. It was an unusual attempt at legitimising a military takeover, using the guise of a popular protest.

Nearly a week later, a counter-protest was held. This time, huge crowds came out in support of the civilian government.

With more protests called by pro-democracy groups to “counter a military coup”, Sudan could be set for yet another period of showdown between the armed forces and the people.

The country has made huge strides in normalising ties with the West and unlocking much-needed funding streams. The promise of transition to democracy has kept many Sudanese and the country’s allies hopeful. But all that could be at risk now.