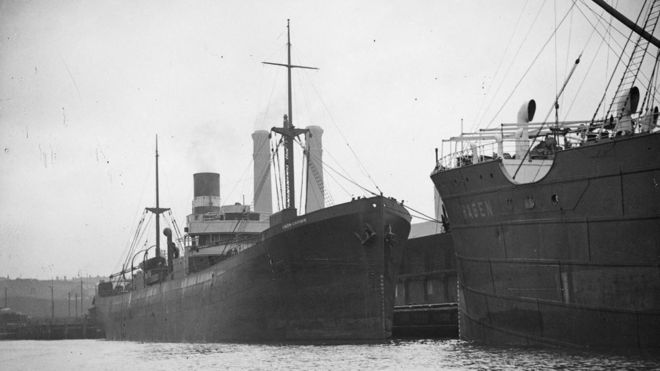 The wreck of an Australian ship sunk by a Japanese submarine in World War Two has been found after 77 years, officials say.

The SS Iron Crown, a naval freight ship, was hit by a torpedo off the state of Victoria in 1942, killing 38 people. Its five remaining crew members survived.

The ship sank within 60 seconds of the attack in Bass Strait.

Maritime archaeologists called the find “an event of national significance”.

A search team from the Australian National Maritime Museum located the shipwreck about 100km (60 miles) off Victoria.

Measuring about 100m (330ft) long, the ship was found upright and “relatively intact” about 700m below the ocean surface, officials said. Its bow, railings and anchors were also found in place.

The team used sonar devices and a drop camera to scour the seabed and map the site.

Peter Harvey, a maritime archaeologist for Heritage Victoria, said it was the only ship to have been sunk by a torpedo in the state’s waters.

It had been transporting ore from South Australia to New South Wales when it was attacked. The five survivors were rescued from the water by another ship.

“Locating the wreck after 77 years of not knowing its final resting place will bring closure for relatives and family of those that were lost at sea,” Mr Harvey said.

Its oldest surviving crew member died in 2012. George Fisher told historians in 2003 that the attack had been “one of the saddest” events of his life, the Australian Broadcasting Corporation reported.

The wreck’s exact whereabouts have not been revealed in order to protect the site.

Authorities said they planned to hold a memorial service there.