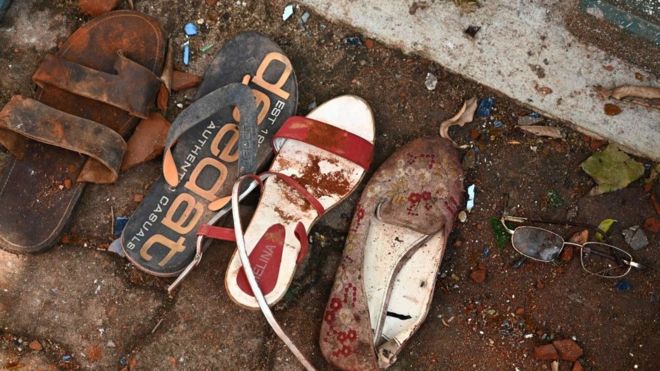 Sri Lanka is in shock after a wave of bombings targeting churches and hotels left 310 people dead. Churches were hit during Easter services on Sunday in the cities of Colombo, Negombo and Batticaloa.

Most of those killed are thought to be Sri Lankan nationals but officials say at least 31 foreigners are among the dead including British, Indian, Danish, Saudi, Chinese and Turkish nationals.

The government temporarily restricted some social media networks to try and halt the spread of misinformation, so details have been slow to emerge. But this is what we know so far about those who lost their lives.

One of the first victims to have been identified last night was Sri Lankan celebrity chef Shantha Mayadunne.

Her daughter Nisanga Mayadunne had posted a picture of the family having breakfast in the Shangri-La hotel in Colombo shortly before an explosion occurred there.

One of their family members later posted on Facebook confirming that both Shantha and Nisanga had died, saying “no words can describe the pain”.

Four Sri Lankan staff members at the Taprobane restaurant in the Cinnamon Grand hotel have died in the attacks.

“It was a busy morning. It’s Sunday morning during buffet breakfast so it’s one of our busiest periods,” the Cinnamon Grand hotel spokesman told the BBC.

“They were servers at the restaurant. One of them was working at the live food stations making hoppers [a Sri Lankan pancake].”

They have been identified only as Shantha, Sanjeewani, Ibrahim and Nisthar.

Three staff members at the Shangri-La

The Shangri-La Hotel in Colombo announced in a Facebook statement that three of its staff were “fatally injured in the course of their duties”.

No further details are known so far.

Three children of Danish billionaire Anders Holch Povlsen died in the attacks, a spokesman has confirmed to the BBC. The company was unable to reveal any more details at this time and asked for the family’s privacy to be respected.

One of his children had four days ago posted a picture on Instagram that was geo-tagged Sri Lanka.

Mr Povlsen, 46, owns the Bestseller clothing chain and is the largest stakeholder in the hugely popular online retailer Asos.

The deaths were confirmed by the UK’s High Commissioner to Sri Lanka, James Dauris.

Three family members were among the victims.

Ben Nicholson said that his wife Anita, his 14-year-old son Alex and 11-year-old daughter Annabel were killed in the restaurant of the Shangri-La Hotel.

“Mercifully, all three of them died instantly and with no pain or suffering,” Mr Nicholson said in a statement.

“I am deeply distressed at the loss of my wife and children. Anita was a wonderful, perfect wife and a brilliant, loving and inspirational mother to our two wonderful children.

“The holiday we had just enjoyed was a testament to Anita’s enjoyment of travel and providing a rich and colourful life for our family, and especially our children.

“Alex and Annabel were the most amazing, intelligent, talented and thoughtful children and Anita and I were immensely proud of them both and looking forward to seeing them develop into adulthood.”

Mr Nicholson also asked the media to “respect our privacy and allow us to grieve together”.

Ten Indians, including seven from a political party

Ten Indian nationals, some of whom were political party workers from Bangalore, died in the bombings.

The party workers have been identified as K G Hanumantharayappa, M Rangappa, K M Laxminarayan, Lakshmana Gowda Ramesh, H Shivakumar, A Maregowda and H Puttaraju. They were all members of the Janata Dal Party (JDP).

The JDP workers were on holiday in Sri Lanka after polling for the Lok Sabha elections ended in the state on 18 April.

The chief minister of the Indian state of Karnataka, H D Kumaraswami said in a tweet that he had known some of the party workers personally, adding that he was “deeply pained”.