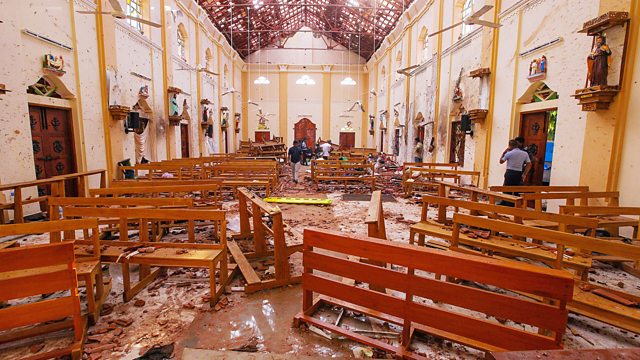 Eight British citizens are among the hundreds killed in explosions in Sri Lanka on Easter Sunday, Sri Lanka’s High Commissioner to the UK has said.

It has been widely reported that they include a mother and her 11-year-old son staying at the Shangri-La hotel.

The woman’s daughter is unaccounted for, while her husband is believed to have survived.

Police say at least 290 people have been killed and 500 injured in eight blasts, six of which were in Colombo.

In an interview with BBC Radio 4’s Today programme, Manisha Gunasekera, Sri Lanka’s High Commissioner to the UK, said: “As of now I think there’s information on eight [British] nationals who have lost their lives.”

The UK Foreign Office confirmed British nationals were among those killed but has not confirmed the number of victims.

A spokesperson said: “Our staff are supporting the relatives of the victims and are continuing to work with the relevant authorities to obtain further information.”

Officials in Sri Lanka believe at least 35 foreign nationals are among the dead.

Danish, Indian, Turkish and Dutch citizens are also among those known to have died.

The UK’s High Commissioner to Sri Lanka, James Dauris, said he had spoken with Britons in hospital “who have been affected by today’s senseless attacks”.

Mr Dauris urged those still in the country to contact relatives and to follow instructions from local authorities.

In the capital Colombo, St Anthony’s Shrine and the Cinnamon Grand, Shangri-La and Kingsbury hotels were targeted.

There were also explosions at a hotel near Dehiwala zoo and in the residential district of Dematagoda.

Further blasts took place in St Sebastian’s Church in Negombo, a town approximately 20 miles north of Colombo, and at Zion Church in Batticaloa, on the east coast.

Ms Gunasekera told the BBC that the large Sri Lankan community in the UK was “very concerned”.

The Queen has offered her condolences to Sri Lanka’s president, saying her thoughts and prayers were with all Sri Lankans.

She said: “Prince Philip and I were deeply saddened to learn of the attacks in Sri Lanka yesterday and send our condolences to the families and friends of those who have lost their lives”.

Kieran Arasaratnam, a professor at Imperial College London, was on his way to the breakfast room in the Shangri-La hotel when he heard the blast.

He told the BBC he saw a young child, aged about eight or nine, being carried to an ambulance, and all around him, “everyone’s just running in panic”.

“The military was coming in. It’s just total chaos. So I then just literally ran out and then I looked to the room on the right and there’s blood everywhere.”

‘Lucky to be alive’

Tourist Marisa Keller, from London, was also staying at the Shangri-La but wasn’t in the hotel when it was attacked. She said she felt “lucky to be alive”.

“There were lots of bodies, blood, ambulances, police. Swat teams were sent in.

“One side of the hotel was blocked off. They were letting people back in because of the hot sun,” she said.

Julian Emmanuel and his family, from Surrey, were staying at the Cinnamon Grand when they were woken up by the explosion.

“There were ambulances, fire crews, police sirens,” he told the BBC.

“I came out of the room to see what’s happening, we were ushered downstairs.

“We were told there had been a bomb. Staff said some people were killed. One member of staff told me it was a suicide bomber.”

The Sri Lankan government said on Monday that the bombings were attack was carried out with the support of an international network.

It has blamed a little-known local jihadist group, National Thowheed Jamath, although no-one has yet admitted carrying out the attacks.

Police have arrested 24 people in a series of raids.

Archbishop of Canterbury Justin Welby has condemned the attacks as “utterly despicable destruction” during his Easter address at Canterbury Cathedral.

Prime Minister Theresa May said the killings were “truly appalling” and “no-one should ever have to practise their faith in fear.”

Labour leader Jeremy Corbyn said: “I stand with the victims, their families, the people of Sri Lanka and Christians around the world. We must defeat this hatred with unity, love and respect.”