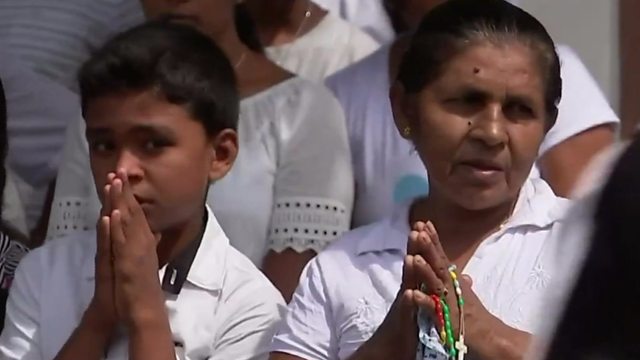 One of the attackers behind the Easter Sunday bombings in Sri Lanka once studied in the UK, officials say, as further details on the bombers emerge.

He visited south-east England in 2006-7 to study but did not complete a full university degree, a senior Whitehall official told the BBC.

The death toll has risen to 359, with more than 500 people wounded.

Prime Minister Ranil Wickremesinghe has said the Islamic State (IS) group may be linked to the blasts.

IS has said it carried out the attacks, which targeted churches and high-end hotels, although it did not provide direct evidence of its involvement.

What do we know about the attackers?

A Whitehall official confirmed the name of the bomber who had visited the UK as Abdul Latif Jamil Mohammed.

Sri Lankan Deputy Defence Minister Ruwan Wijewardene said the attacker had gone on to do “his postgraduate in Australia before coming back to settle in Sri Lanka”.

Confirmation that he studied in the UK in the mid-2000s would tend to cast doubt on the likelihood of his being radicalised so long ago, says the BBC’s Security Correspondent Frank Gardner.

It also points to his being in his early to mid-30s at the time of the attacks, our correspondent adds.

Mr Wijewardene added that most of the attackers had been “well educated and come from… middle or upper middle class” families.

“They are financially quite independent and their families are quite stable financially,” he said.

Two of the bombers are reportedly brothers and the sons of a wealthy Colombo spice trader. They detonated their explosives at the Shangri-La and the Cinnamon Grand hotels, police sources told the AFP news agency.