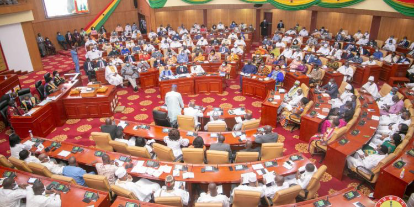 The Speaker of Parliament has admitted a private member’s motion for the House to constitute a bi-partisan committee to conduct a probe into circumstances that marred the confirmation of some Metropolitan, Municipal and District Chief Executive nominees in the country.

The committee is to be chaired by a member of the minority.

The notice of motion is captured in the order paper for Wednesday,10th November 2021.

The other terms of reference captured in the motion include an enquiry into circumstances leading to the deployment of huge numbers of police and other security personnel in Sekyere Kumawu, Assin South, Cape Coast, Awutu Senya West, Sefwhi-Bekwai-Anhwiaso, Juaboso and Shama.

According to the motion, Parliament can also make other recommendations for the consideration of the House.

The MMDCE election in some parts of the country turned chaotic, with violence reported in some cases.

In some areas, journalists were denied access to cover the event, sparking suspicions that the polls were not conducted in a free and fair manner.

The Head of Public Affairs of the Ghana Police Service, ACP Kwesi Ofori in an interview on Eyewitness News said the police service is in full control of the situation and working to ensure that incidents of violence are curtailed.

Even before President Akufo-Addo’s MMDCE nominees were announced, various groups staged protests to register their displeasure over the president’s choice, which resulted in some arrests.