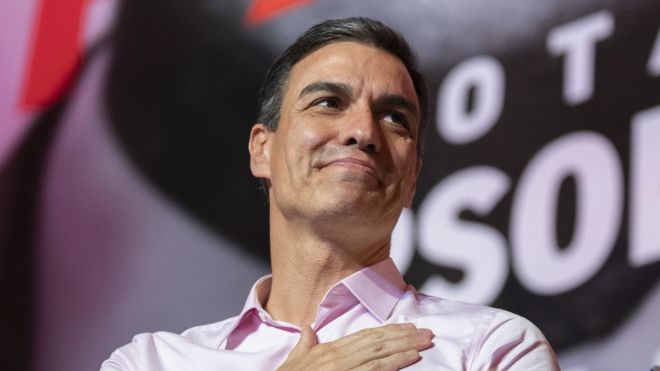 Spain’s Socialists are considering their next move after failing to gain a majority in Sunday’s general election.

Pedro Sanchez’s party won the election with 29% of the vote.

But he must join forces with either left-wing Podemos and other regional parties or the centre right if he decides to form a coalition government.

However, fellow Socialist and Deputy Prime Minister Carmen Calvo said in a radio interview that the party would try to govern on its own.

She told Cadena Ser: “We have more than enough to steer this ship along the course it must follow.”

And a senior Socialist politician, Miquel Iceta Llorens, told the BBC’s Newshour that a minority government could work with case-by-case support from other parties.

The Socialists had been governing as a minority since taking office last June. The election was called after Catalan nationalists withdrew support for the government’s budget.

For an absolute majority, the Socialist party, which has 123 seats, would need Podemos’ 42 seats and 11 more seats from Basque nationalists or Catalan separatists.

Podemos leader Pablo Iglesias said on Sunday evening that he would be willing to “work towards a coalition government.”

However Albert Riviera, head of Ciudadanos, said he would lead the opposition and “keep a close eye on the government.”

Talks on any possible coalition could last for some weeks.

With the local and European elections due in May, a government might not be formed until June or July.