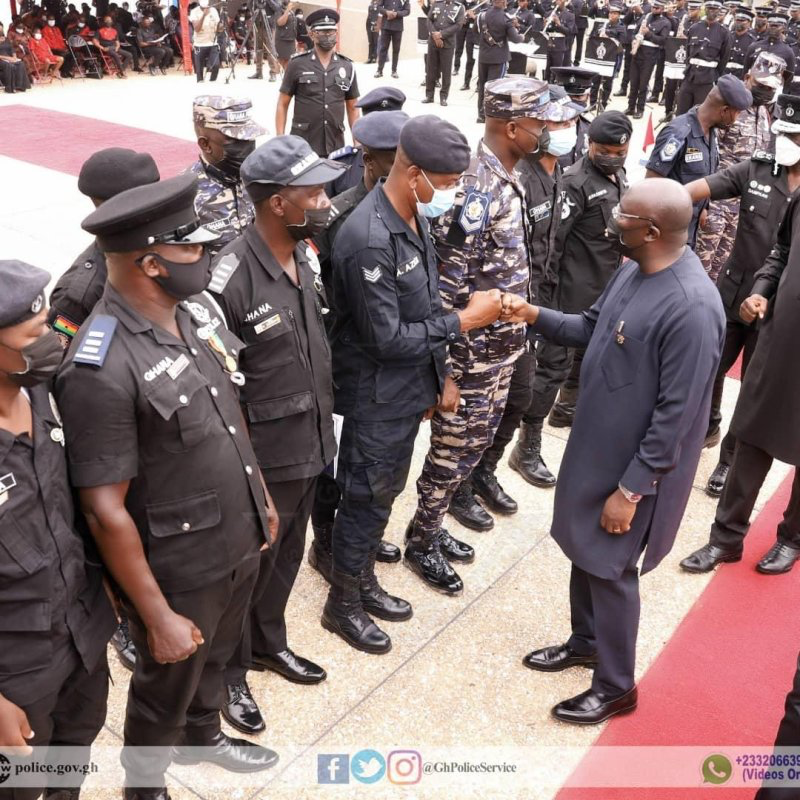 The personnel were recognised when Dr George Akuffo Dampare, Inspector-General of Police (IGP) and some members of the Police Management Board (POMAB) visited New Longoro on a duty tour of the Bono-East Region.

A statement from the Police said within a few minutes of interaction with the personnel, the IGP and his team observed their unparalleled commitment to duty. It said the elders and members of the community, at a meeting with the IGP and his team, spoke highly of the commitment and sacrifices of the personnel in fighting crime in the area despite the challenging circumstances under which they worked.

The statement said the positive comments confirmed the observation of the IGP.
It said as part of the recognition package, the personnel and their spouses were flown to Accra on Monday, November 1, 2021, to be special guests at the 2021 Police Memorial Day Parade held on Tuesday, November 2, 2021, at the National Police Training School in Accra.

The statement said during the parade, the officers had the opportunity to interact with Vice President Alhaji Dr Mahamudu Bawumia who commended them and urged them to do more.
It said this was followed by a short ceremony at the National Police Headquarters where the IGP and members of the POMAB presented a citation and a certificate of honour to each of them in recognition of their hard work.

The statement said the officers were then hosted to a lunch which was graced by Deputy Commissioner of Police (DCOP) Mrs Habiba Twumasi Sarpong, Director-General Welfare, some other Senior Officers and the Police Band which treated them to some good music.
It said on Wednesday, November 3, 2021, the officers and their spouses were taken on a city tour of Accra and Tema. The statement said they visited Tema Harbour, Accra Mall, Kwame
Nkrumah Memorial Park and Osu beach. It said the officers returned to their stations on Thursday, November 4, 2021, and were seen off at the airport by a special protocol team
from the Police Headquarters.

The statement said the celebrated Officers and their families were overjoyed and expressed their profound gratitude to the Police Administration and the entire Service for the honour and unique experience.

It said the Police Administration intended to regularly recognize hard-working personnel who exhibited enthusiasm and professionalism in the discharge of their duties.