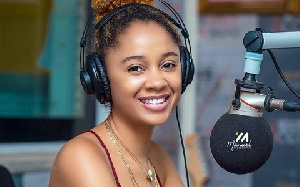 Sister Derby has finally broken silence on her cryptic message which attracted trouble and insults targeted at Fella Makafui.

The past weekend, the Ghanaian mermaid reunited with her ex-boyfriend, Medikal, when she joined the AMG rapper to perform their “Too Risky” song they recorded when they were together.

The following morning after the show, Sister Derby’s cryptic message about how someone hatefully reacted to her with a disgusting attitude when they met, surfaced online.

Though she never mentioned anyone’s name, fans assumed she was addressing Fella Makafui and therefore launched verbal attacks on her for being disrespectful to Sister Derby.

Fella has also angrily reacted by dropping a comment on social media saying she never met Sister Derby on the day of the concert.

Now, the Ghanaian mermaid has come out to clear the air, disclosing that whoever she was addressing is not even someone in the Ghanaian showbiz.

She also added that the post that was circulating, was even posted before she performed at the concert.