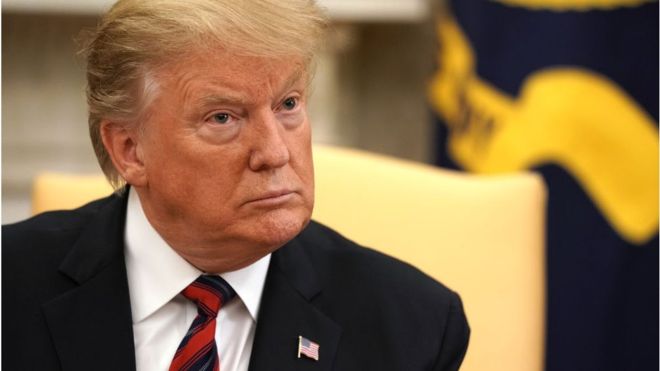 Stock markets in China and Europe have been hit after US President Donald Trump threatened new tariffs on China, putting a trade deal in doubt.

He said on Twitter the US would more than double tariffs on $200bn (£152bn) of Chinese goods on Friday and would introduce fresh tariffs.

Recent comments had suggested both sides were nearing a trade deal.

A Chinese delegation is preparing to travel to Washington for negotiations aimed at ending the trade war.

It is not clear whether Beijing’s top trade negotiator Vice-Premier Liu He will be part of those negotiations that are due to resume on Wednesday.

“We are currently working on understanding the situation,” foreign ministry spokesman Geng Shuang said during a regular news briefing.

Earlier, US media reported that Beijing was considering cancelling the talks. Reports said the Chinese were due to send a 100-person delegation to the negotiations.

European stock markets fell in early trading, with the main Paris and Frankfurt indexes down more than 2% by mid-morning. Particularly hard hit were the makers of cars, car parts and steel.

US stock futures pointed to a lower open on Wall Street. Markets in London are closed for a bank holiday.

Michael Hirson, Asia director at Eurasia Group, said: “His [Mr Trump’s] move injects major uncertainty into negotiations, which now face a rising risk of an extended impasse – perhaps even through the US presidential election.”

What did Mr Trump say?

On Sunday the US president tweeted that tariffs of 10% on certain goods would rise to 25% on Friday, and $325bn of untaxed goods could face 25% duties “shortly”.

“The Trade Deal with China continues, but too slowly, as they attempt to renegotiate. No!” he tweeted.

He followed that on Monday by tweeting that the US had been “losing” $500bn a year on trade with China. “Sorry, we’re not going to be doing that anymore!,” his tweet said.

After imposing duties on billions of dollars worth of one another’s goods last year, the US and China have been negotiating and in recent weeks, appeared to be close to striking a trade deal.