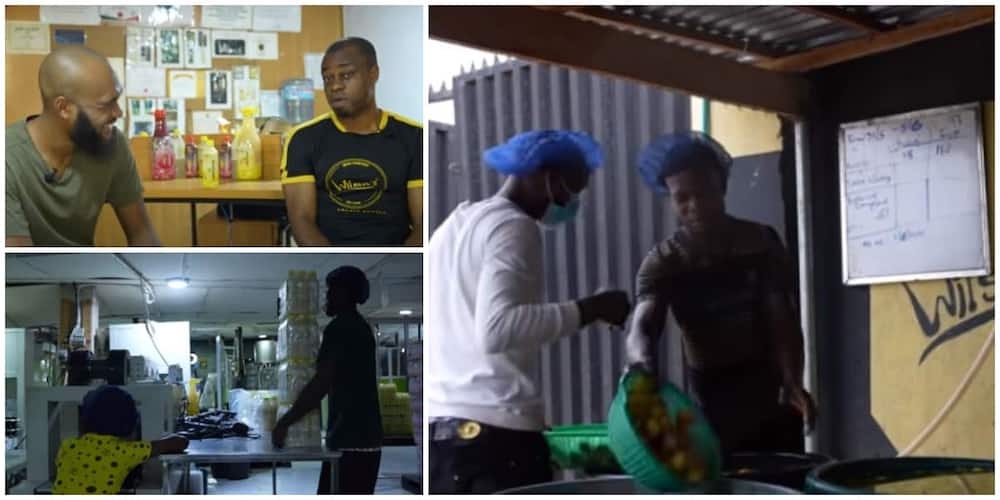 A man, Seyi Abolaji, took a move many would consider by leaving America to become a lemonade seller in Africa

For Europe migration enthusiasts, moving abroad is the best thing that can happen to one, but a US-based Nigerian took a decision they’d consider rather out of place – he left America for Africa.

Seyi Abolaji left America where he had acquired his education and other material things as cars and house to sell lemonade in Nigeria with Ghc30.

The inspiration behind his move

Speaking with Vlogger Tayo Aina, the Stanford University graduate stated he drew inspiration from one of his course mentors who frowned at the trend of people from ‘universities without names’ going on to set up big enterprises while graduates from prestigious institutions lead normal lives after school.

Seyi said while his mum marvelled at his decision to move back to Nigeria, his dad thought he had gone bananas.

With support from his elder brother who is a pharmacist, the history and philosophy graduate started a small lemonade business in Covenant University that in 2010, a business venture that has become a drink company. He employs about 70 persons at the moment Seyi’s business currently employs 60-70 persons directly and 300-400 persons indirectly. He turned his bedroom into a head office and shared how he and a small number of persons picked plastic bottles wastes they used for the business now called Wilson’s Lemonade.

They wouldn’t be discouraged by mockery. Seyi advised upcoming entrepreneurs that entrepreneurship is not a fast way to make wealth but a pathway to achieving it with dedicated efforts. He said wealth is achievable for one who strives to make an impact or add value. Netizens hail the entrepreneur Jenn F. wrote:

“I’m African American and live and born in us. I always saw in my head, all the Africans wanting to come to USA, you guys have so many resources and so many things that are in America that Africa has not established which is waiting to be created.

“Get your degree from the USA if you want but honestly, I myself have business ideas that I’m trying to see how I can establish it since I do t live there. I know my business would flourish and thrive but I must figure out the blueprint. So many businesses to be created in Africa. This is a great example.”

Precious Nwachuku stated: “I’m so glad that Wilson’s juice is getting the exposure it deserves! I’m an alumnus of Covenant University and I recall buying the lemonade at the cafeteria. When it started getting bottled, we rushed it like water.

“Wilson’s Lemonade is simply the best out there. The only challenge is distribution; as I hardly get to see it in the stores. “Keep up the good work! Rooting for you, Wilson’s juice!” Osayi Odigieh reacted: “Wow! Been drinking Wilson’s for years and just finding out how they started is awesome. I love that they have a story for their brand. They pay attention to details. You’d think the drink is produced abroad with the way it is packaged, the branding, product name and all. Really impressed. “I’m definitely stepping up my consumption of the the product, and will use every opportunity to promote it. This is a Nigerian project now and we must ensure it succeeds!”

“Inspiring!!!! This guy is saying the reality in Nigeria. He described what entrepreneurship is all about in Nigeria. It is very difficult but passion, drive and goal keep you going. “If you want to expand, the biggest problem is government agencies not even electricity. They will kill your business if you are not careful.”

The young lady admitted that life in Nigeria since her return hasn’t been easy as she has had to struggle with so many things but at the end of the day, her resolve keeps her going. Ashley also said that the need to have a sense of belonging informed her decision to make a trip back home.